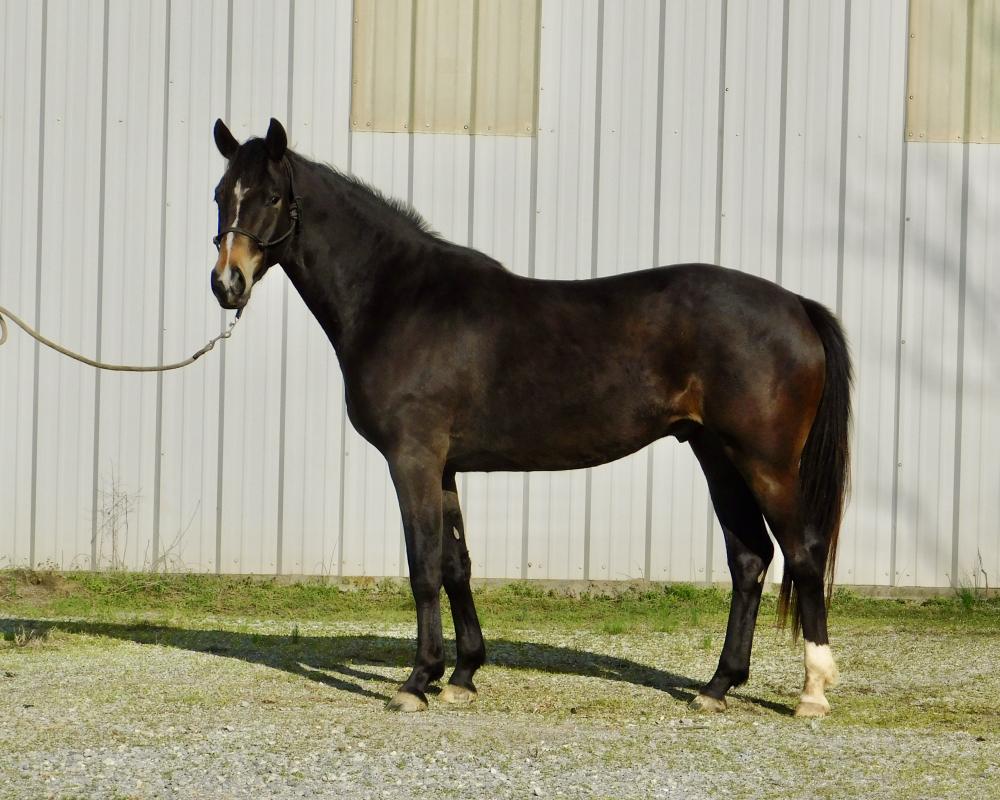 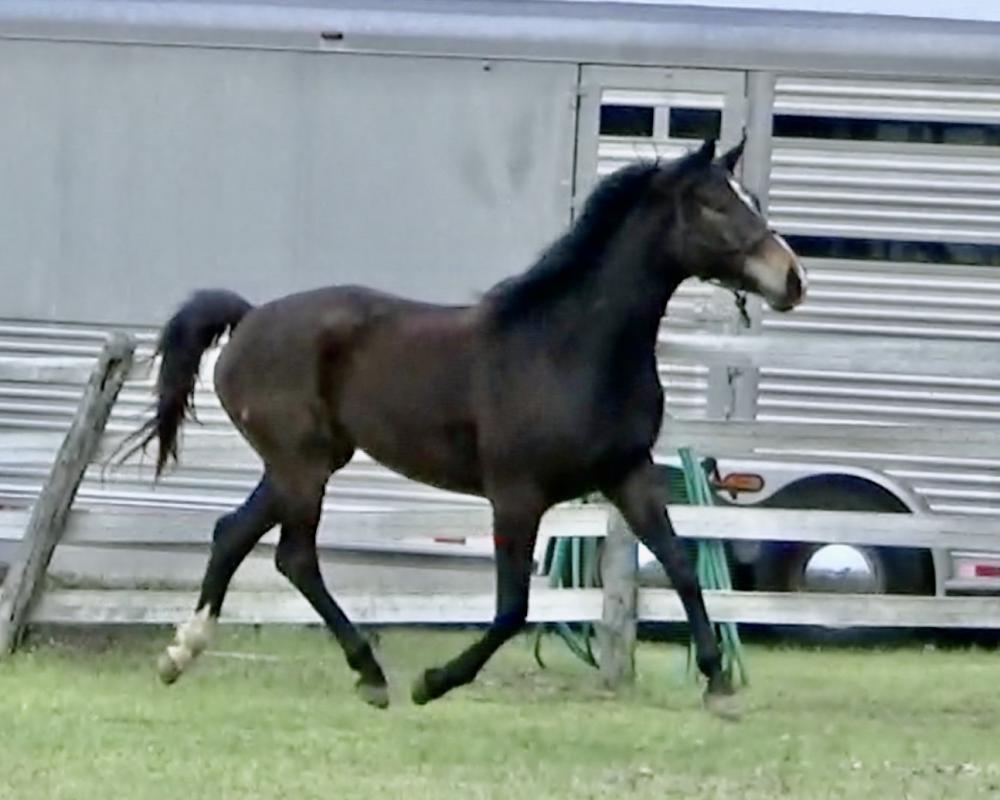 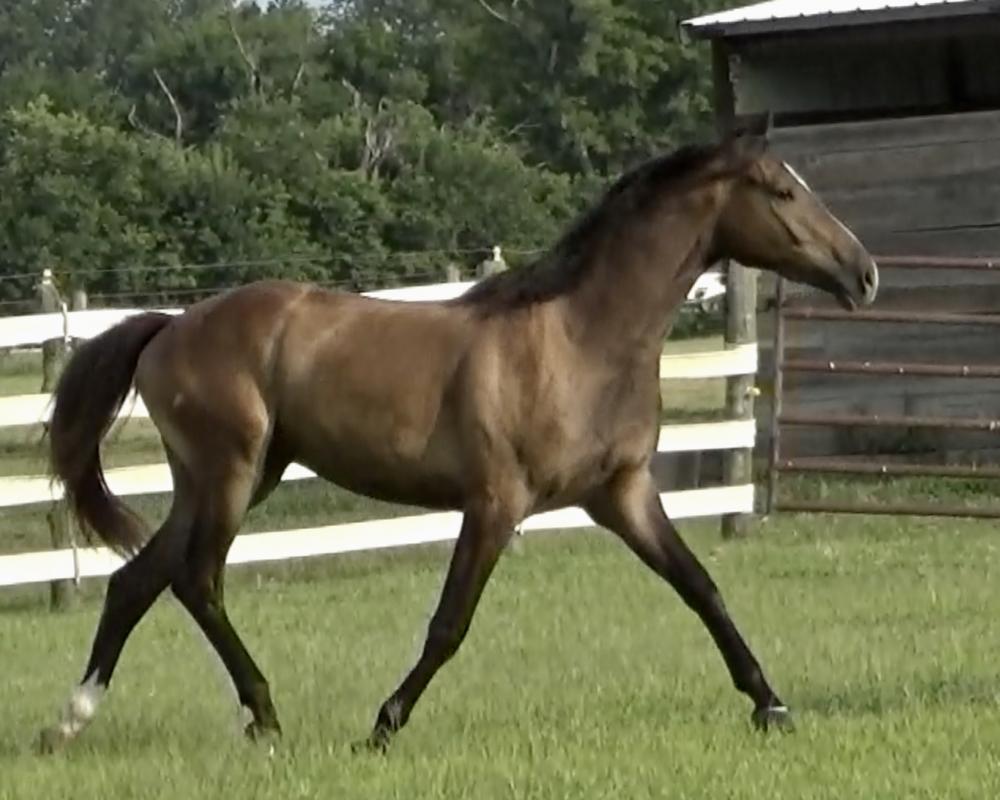 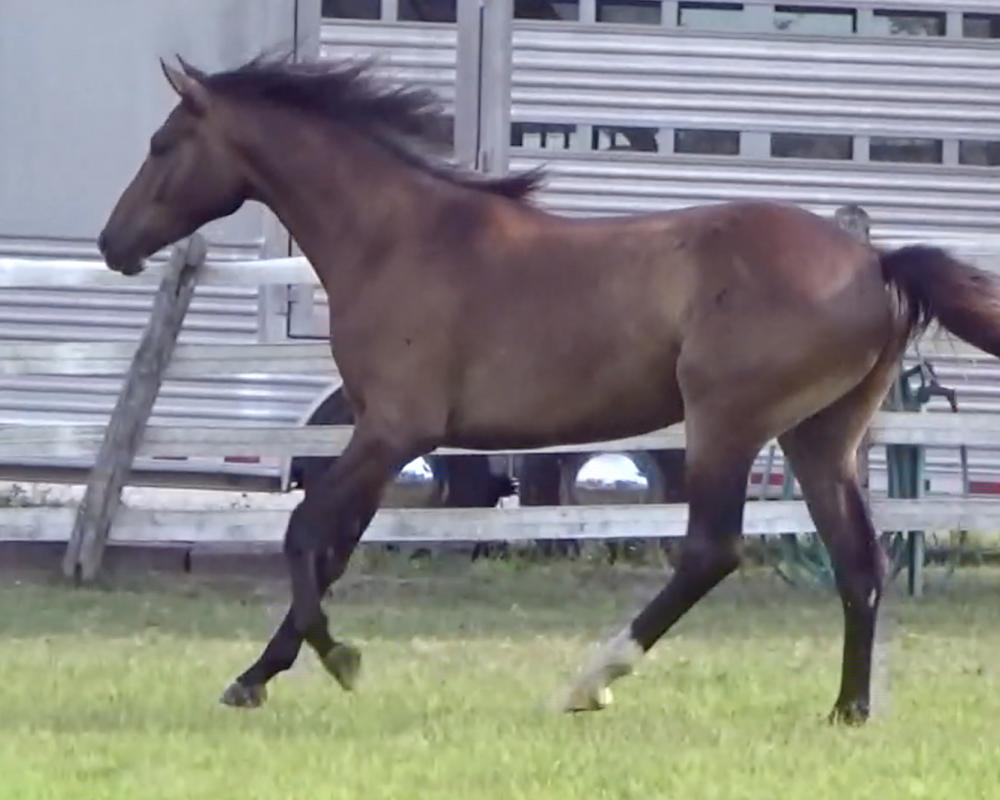 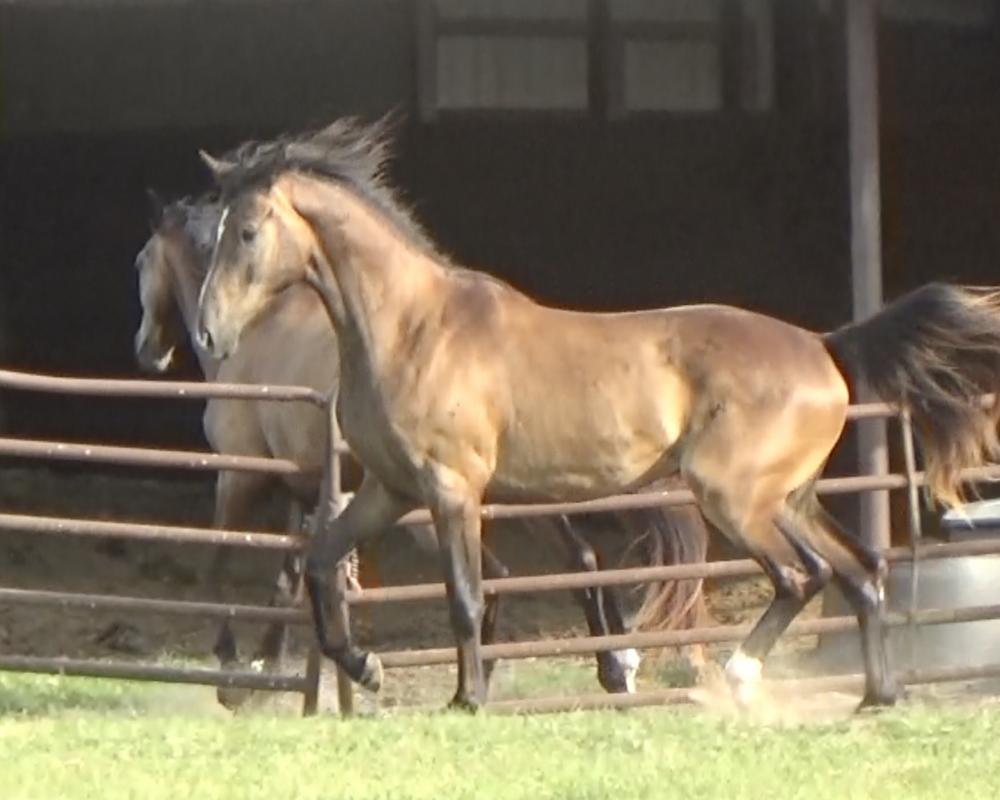 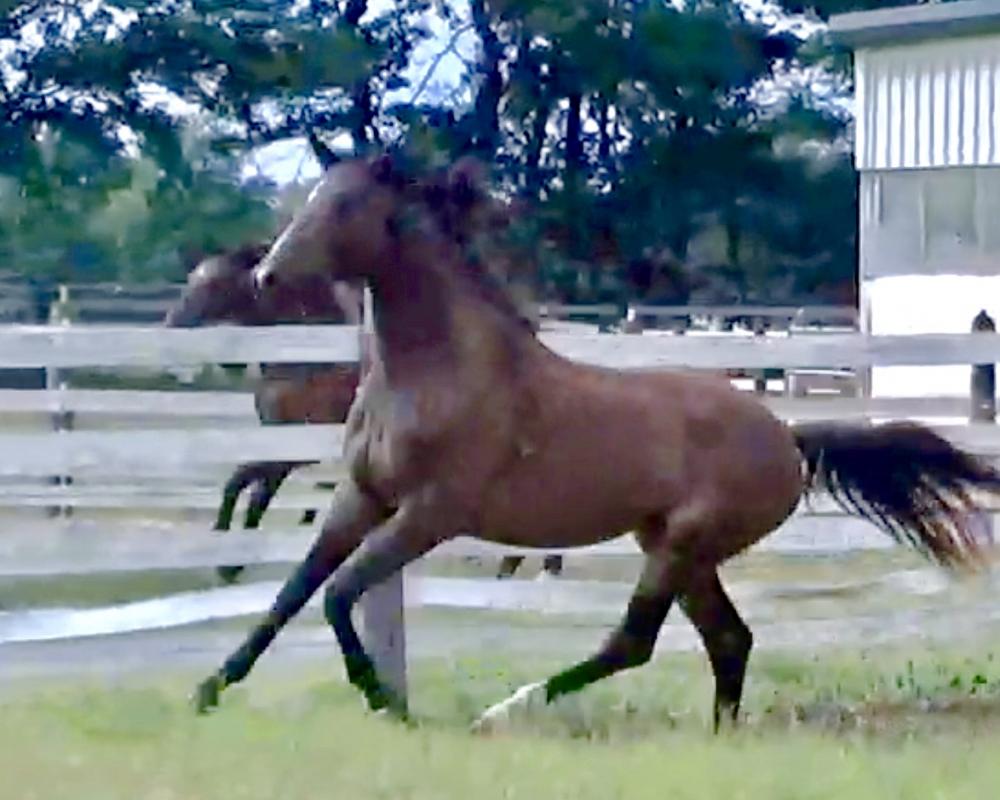 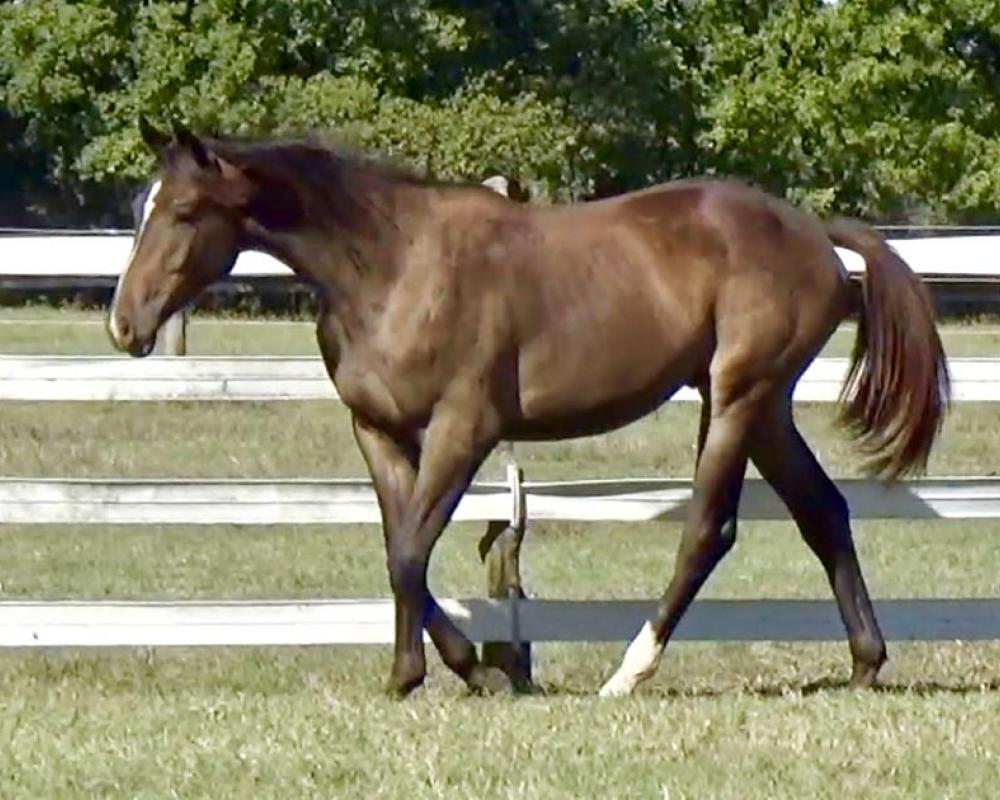 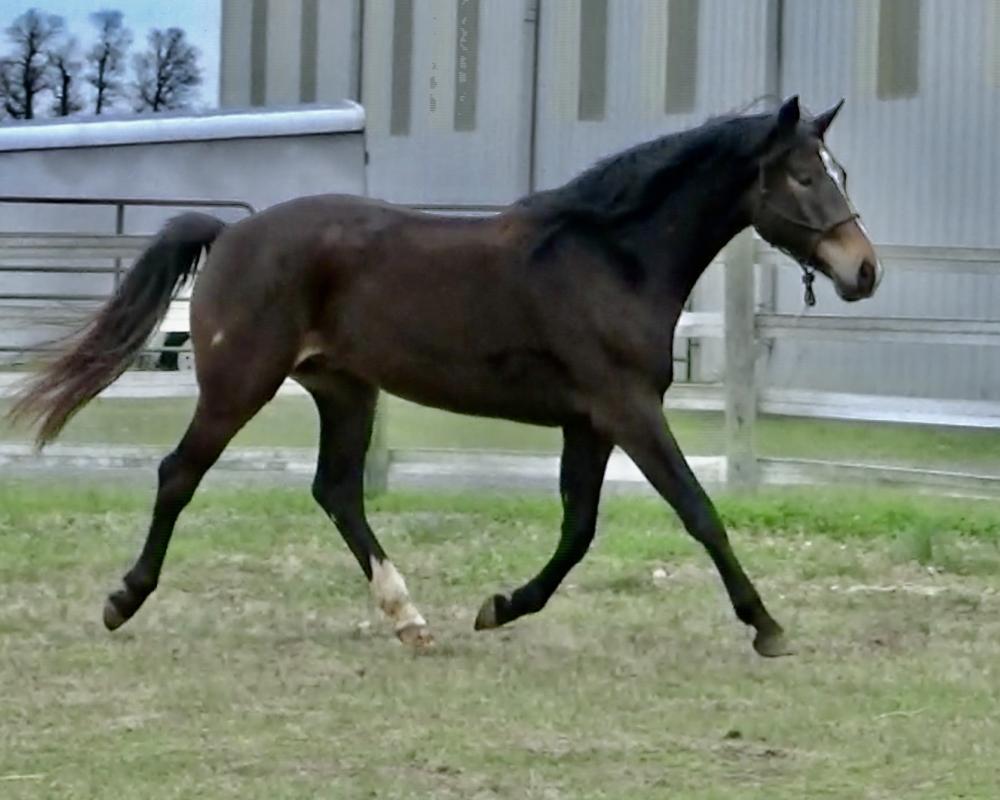 This gelding's reg.name is Sport Royal Zevon. Herzensdieb is a Hanoverian approved Elite German Trakehner stallion. Some of Herzendieb's performance offspring are Hilario Saint and Bundeschampionant Herzenfurst.(he is a relatively young stallion)Great potential.Gorgeous and gentle.Mature about 16.2 expected. 573-703-3150,573-472-1022
Superstitious is by Heling ( sire of top eventers like Abbey GS of Galten Farm.)Superstitious is out of a daughter of the great Enrico Caruso*E*Ps. Enrico Caruso was the sire of Kostolany(sire of Gribaldi) and many other Grand Prix producing sires like Silvermoon,sire of Blue Hors Matine.  Enrico Caruso was a half brother of Peron (team bronze Atlanta Olympics.)
EH Herzendieb :
This striking bay stallion's intelligence and rideability allow him to flourish in his upper level dressage training, and his athleticism gives him talent over fences with beautiful scope. His correct gaits are expressive with the ability to collect.
Herzensdieb has a FN breeding value dressage of 142 points and is in the top 10 percent of German dressage sires. He was honored with the prestigious Elite Hengst title (E.H.) in 2013 by the Trakehner Verband, and he is currently one of the two  E.H. awarded stallions that are actively breeding in the United States. He is a type improver.
Several daughters of Herzensdieb have become winners at mare shows in Europe. His 5-year-old daughter, Helmi (Herzensdieb-SPS Lady Lou, Lauries Crusador) passed her performance test, became the overall champion mare at Elmlohe and qualified for the prestigious Herwart von der Decken-Show. Several of his sons have been licensed in Verden and Neumünster. In all his offspring,elegant type, rideability and refinement can be seen. Herzensdieb not only adds lovely movement and conformation, but he also passes along strength, rideability and a kind temperament.
Herzensdieb was the champion at his German Verband licensing in 2005 and loved by the crowds.He was the top priced sold at the auction (to Louise and Doug Leatherdale/USA.)  In 2006 (still in Germany til about 2016) he was reserve champion of his stallion of his stallion test and the Trakehner champion of the three year olds going along with his nomination for the Bundeschampionat. Then came successes in young horse dressage classes up to medium level.In 2009 Herzensdieb came in second at the qualification to the Bundeschampionat in Warendorf for the six year old dresssage horses. His sire Tambour is a premium and Trakehner elite stallion.
Herzensdieb's get have received numerous accolades, with two young stallions approved by the Trakehner Verband, including one who was approved by the Hanoverian stud book, and 36 daughters who have successfully produced foals introduced into the Trakehner studbook. His famous offspring in the show ring include the French owned Hilario Saint (scores over 70% at Intermediare I. )
Son,Herzenswunsch won a score of 8,4 a great thirty-day-test, particulary amazing was his ridability score of 8,88.
Herzendieb's dam, StPr.St/El.St. Herzensfreude finished her mare test with the record mark of 9,11. His granddam St.P.St./El.St. Herzenslust is the halfsister to the premium stallion Herzkristall(by Goldino). Out of the H-line there are also champion and elite stallion Herzzauber and the stallions Herzkönig,Herzbube and Herzfunke, as well as the sport horses like dressage star Harlem and highly ranked mares.
This gelding is elegant,good natured and sensible. He’s lively out in the pasture but quiet to handle. Zevon’s conformation and movement are outstanding.