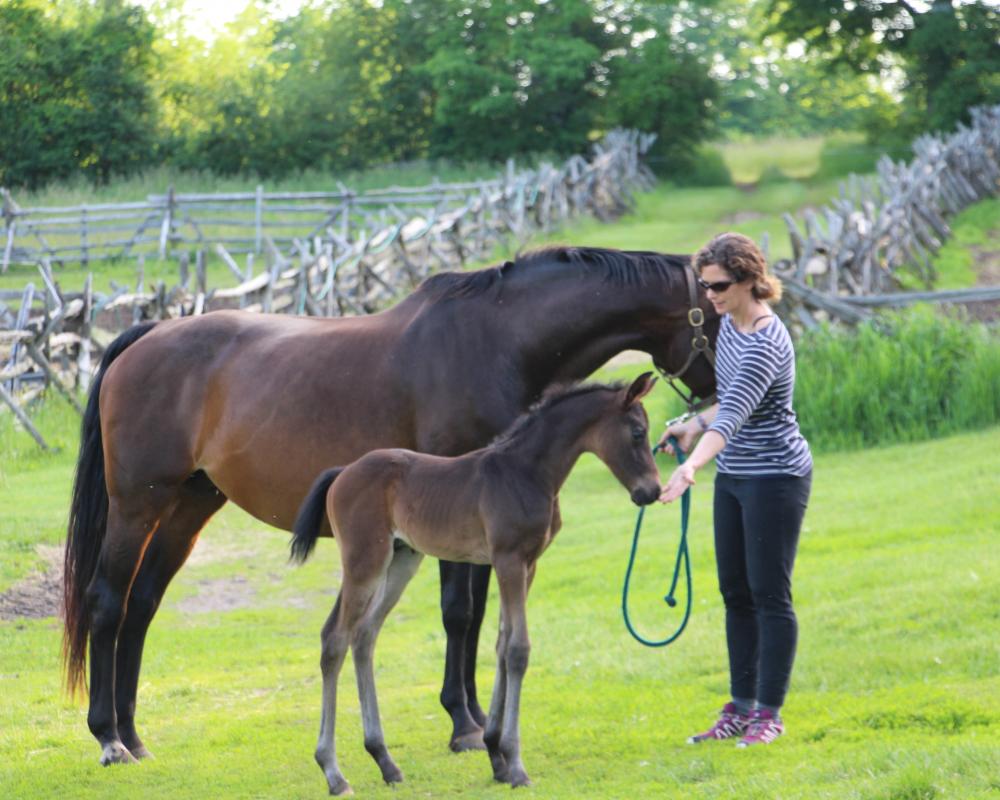 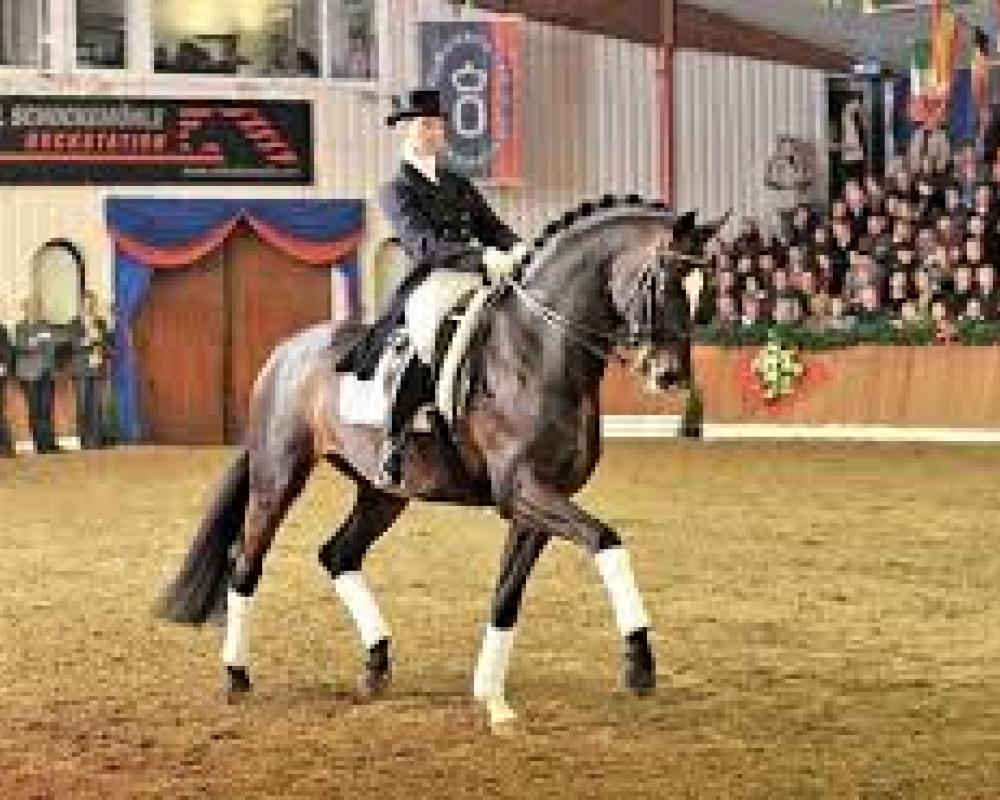 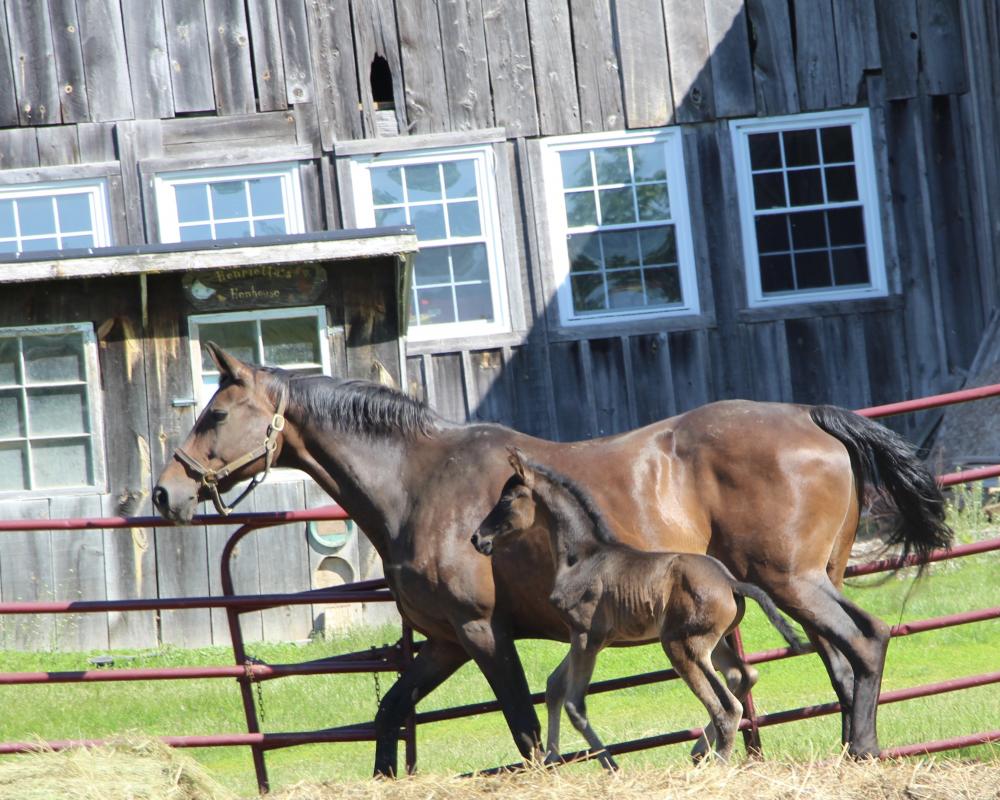 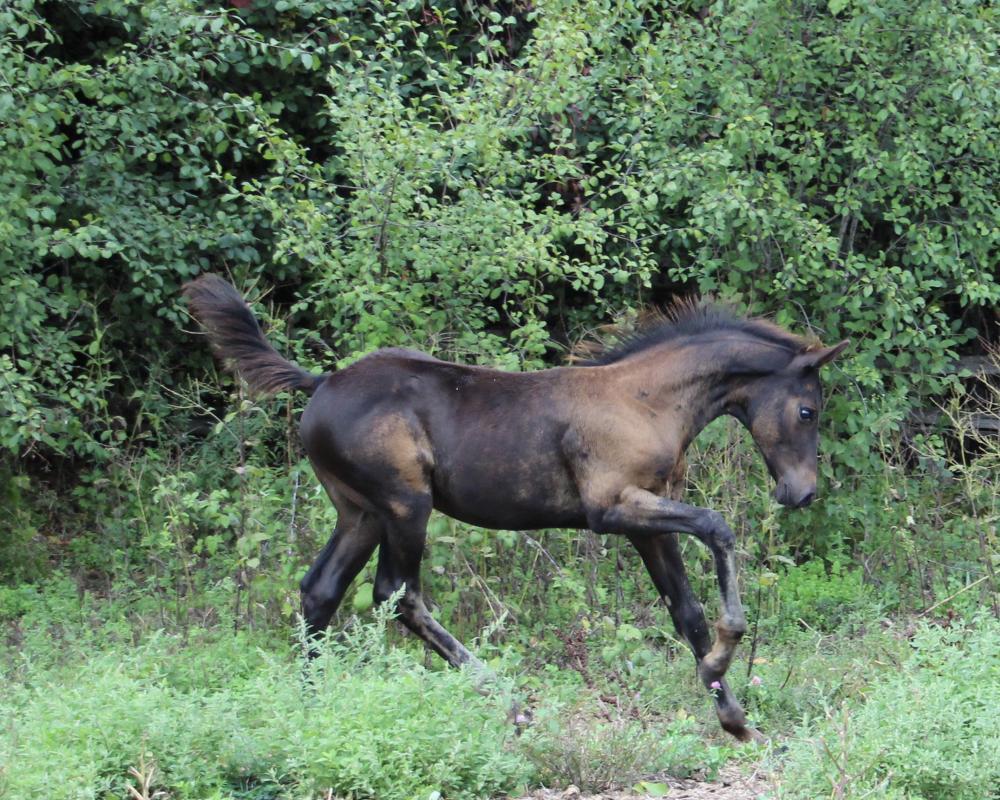 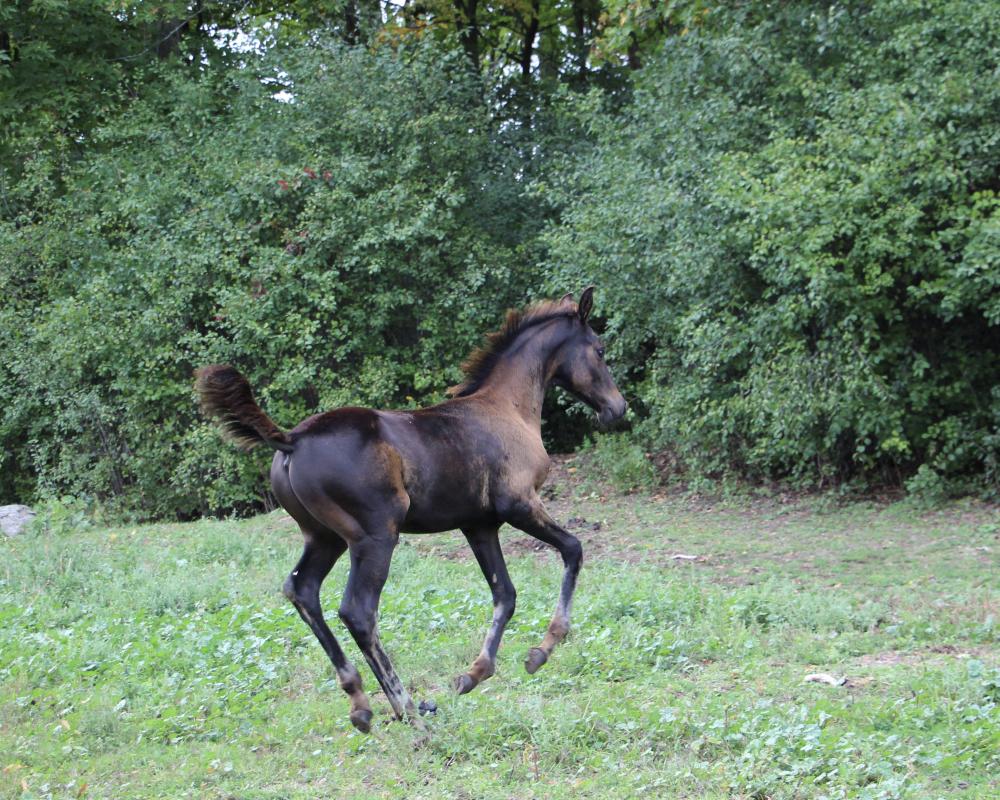 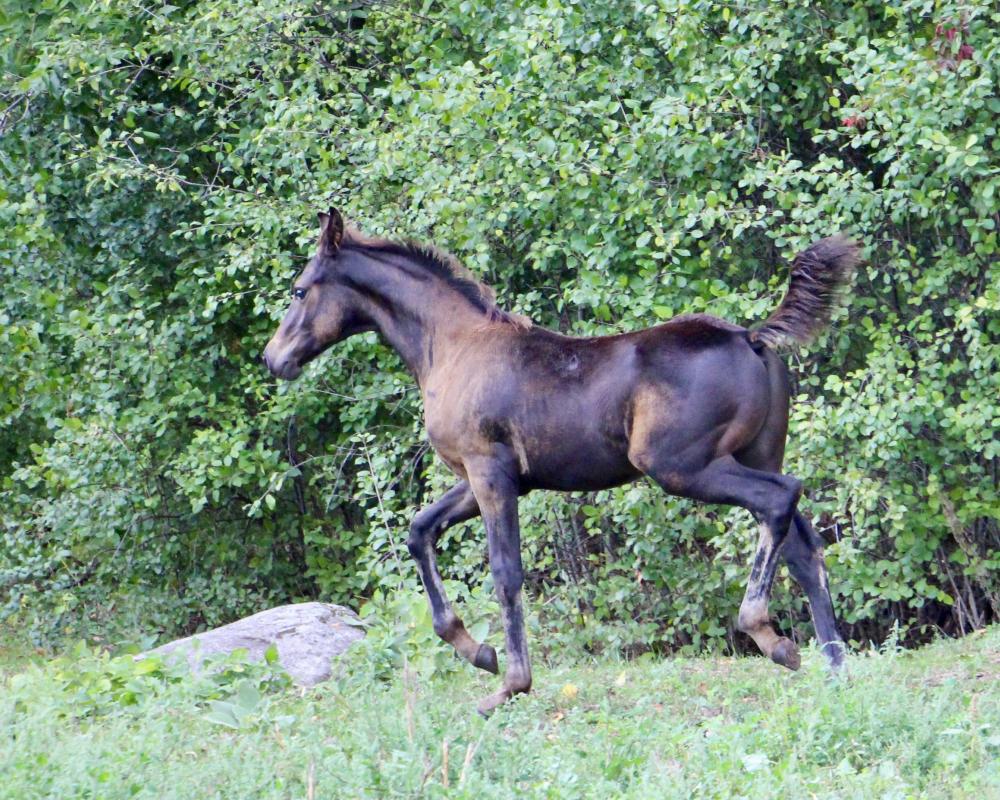 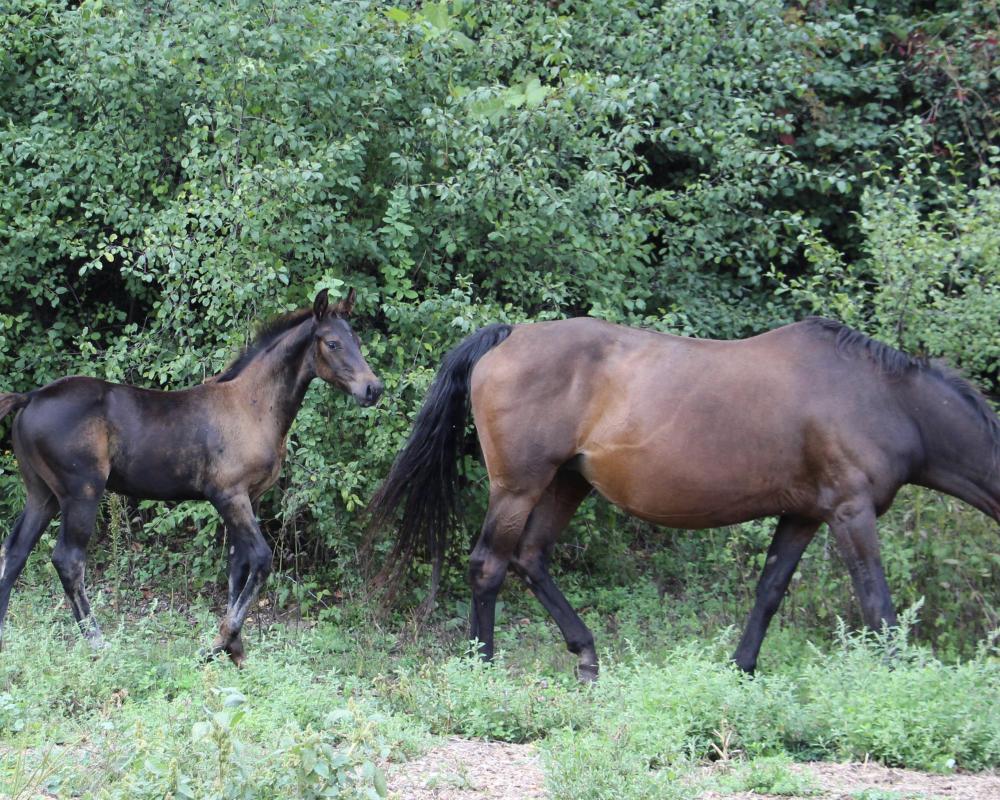 Awarded Elite Premium at his German Oldenburg Verband inspection.
Sebastian Rhode also recommended that this colt should be a Stallion Prospect.

This foal is what dreams are made of. True to his royal German bloodlines he is going to be a real dressage super star. This foal already shows 3 exceptional gaits. He has a lovely rhythmic trot and a very lovely uphill canter. His head is gorgeous with a large kind eye. His topline is a perfect balance. He will have no trouble with the higher level work. He naturally sits and uses his whole body. I can't say enough about this colt. He is sweet and friendly and easy to work with.

An exceptional dressage breeding stallion. Sir Donnerhall is a Bundeschampion, Vice World Champion and was the undisputed top stallion at his licensing in Adelheidsdorf, where he achieved the highest score ever of 163 in his dressage index. His offspring are well on the way to catching him up. In 2010, three Vice Bundeschampions were sired by Sir Donnerhall: North Rhine-Westphalian champion stallion Silbermond, Apassionata and the approved stallion Snap Shot, plus two silver medal winners. One of his sons sold for EUR 300,000 as the most expensive stallion at the 2010 Hanover licensing and he produced two premium status Oldenburg stallions, plus two approved sons in North Rhine-Westphalia. He also sired high-priced elite foals and auction horses - the horse that received the highest bid of EUR 127,000 at the Hanover Elite Auction was by Sir Donnerhall. In 2009, North Rhine-Westphalian champion stallion Silbermond was the most expensive non-approved stallion in Hanover, selling for a price of EUR 195,000. In 2008, Sankt Hülfer sold at auction in Vechta for EUR 300,000 and Schickeria sold for EUR 355,000 in Handorf. Sir Donnerhall's first crop of foals included South German champion stallion Sir Nymphenburg.
Sir Donnerhall's pedigree contains the perfect combination of genes from Sandro Hit and Donnerhall. His dam, Contenance D, was "Brilliantring" mare in Rastede and she is also dam to approved stallion Sir Donnerhall II. Sir Donnerhall is a consistent producer of top dressage offspring.

Belrose is a gorgeous imported German Oldenburg mare. She comes from the best German breeding has to offer. Belrose is sired by the legendary Rubinstein I out of a very important mare line from the Inschallah foundation sire. This mare is as lovely as she is beautiful. She is gentle and has a very easy disposition. Many of Belrose's foals are competing successfully in dressage. She gives all her foals her calm temperament and beautiful features.

Sweet William is proudly offered for sale. He will be a top competition horse for the serious professional or the ambitious amateur. He will have stunning gaits and will be highly trainable.