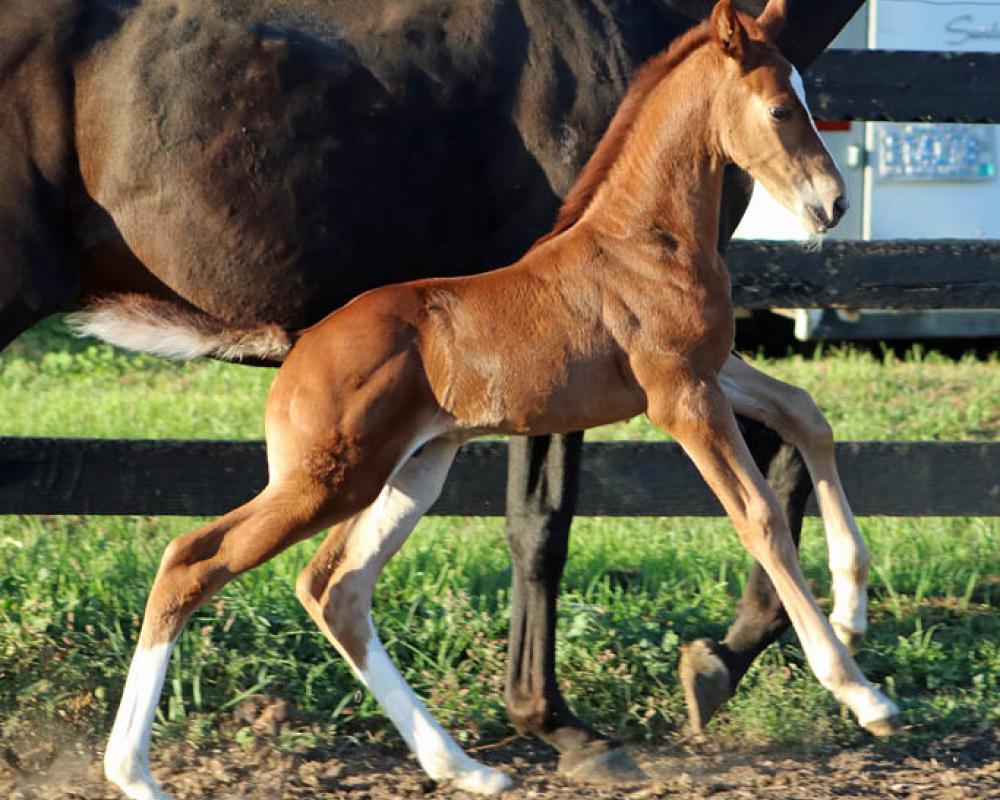 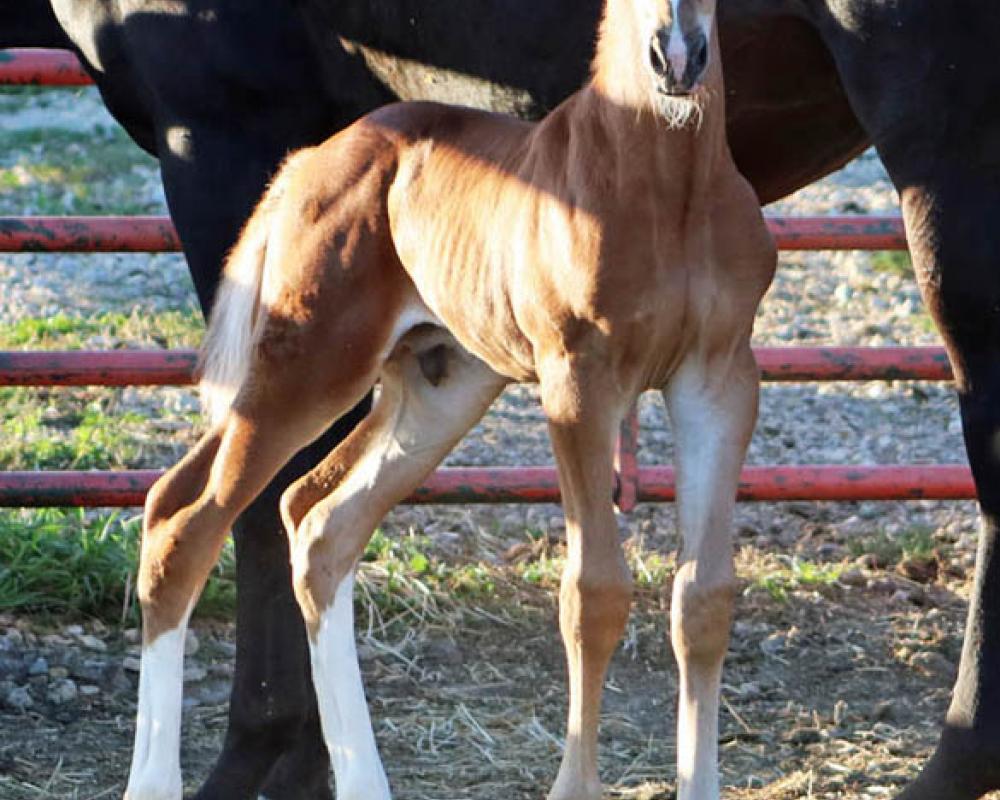 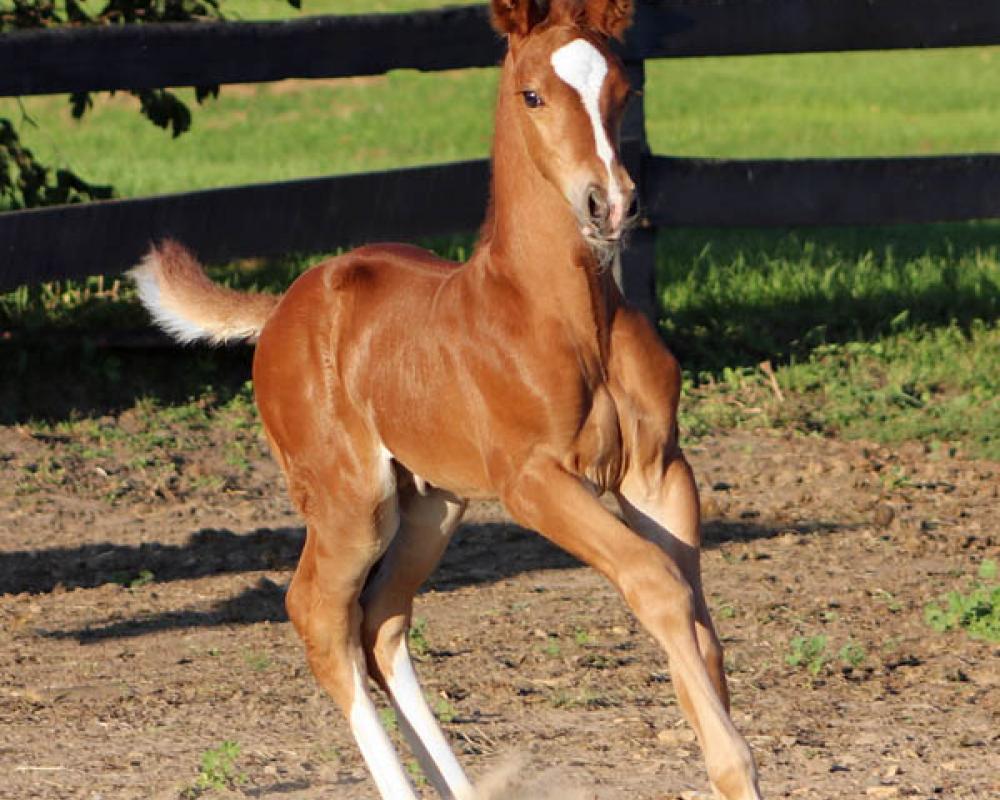 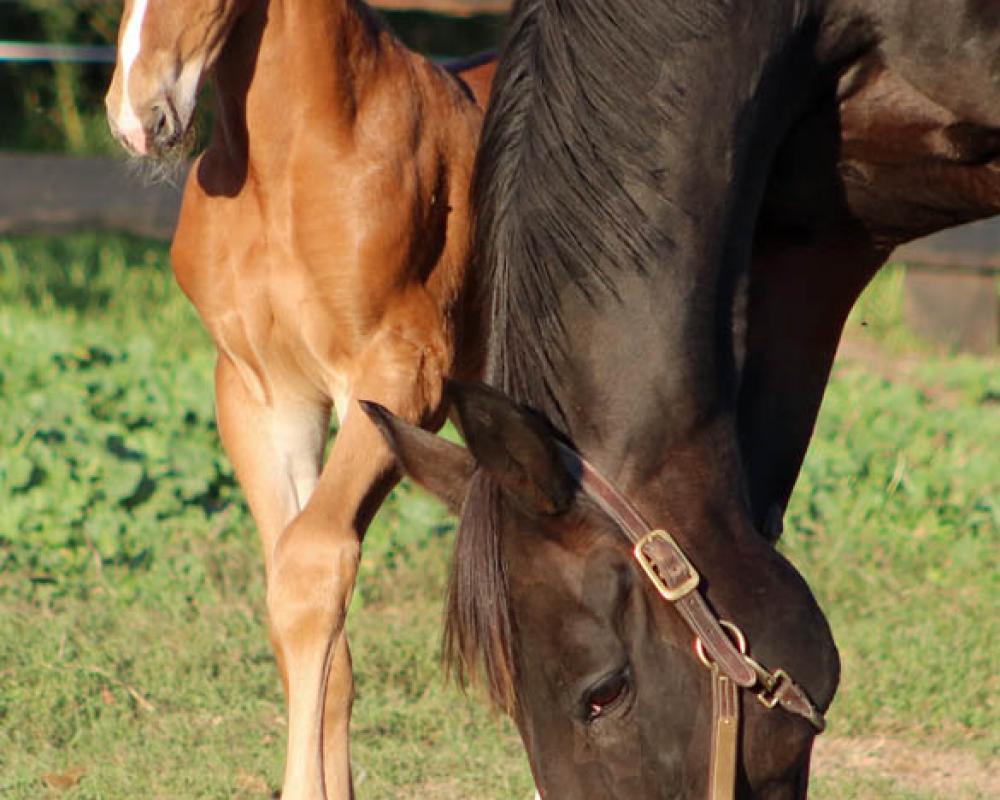 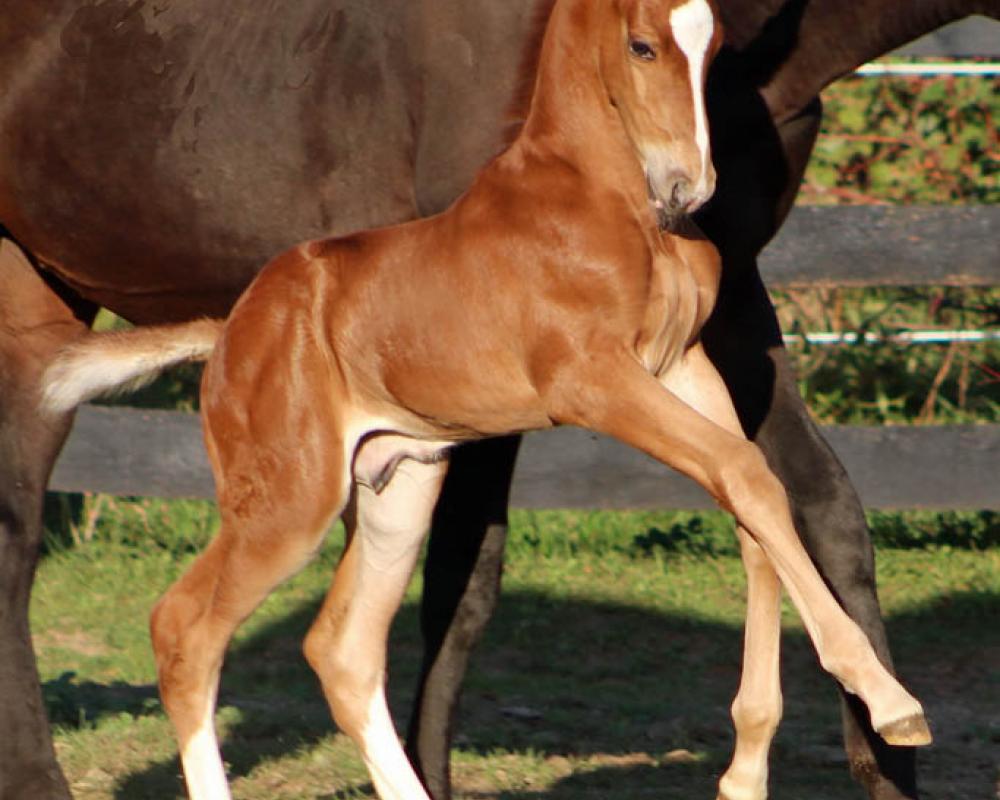 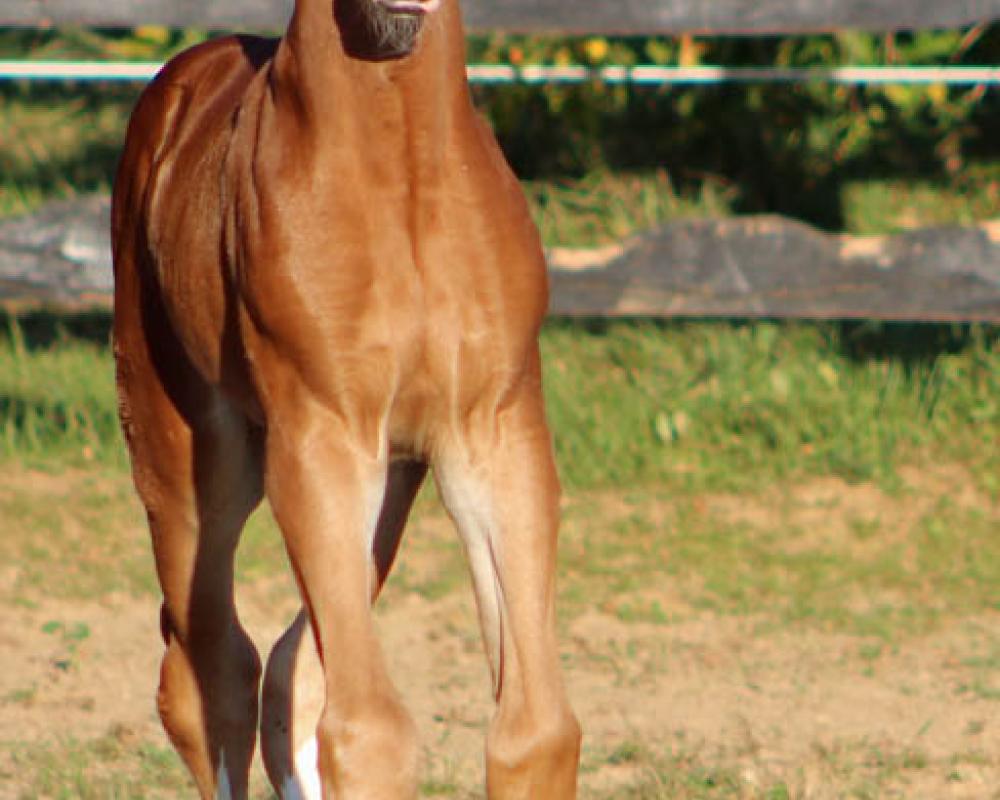 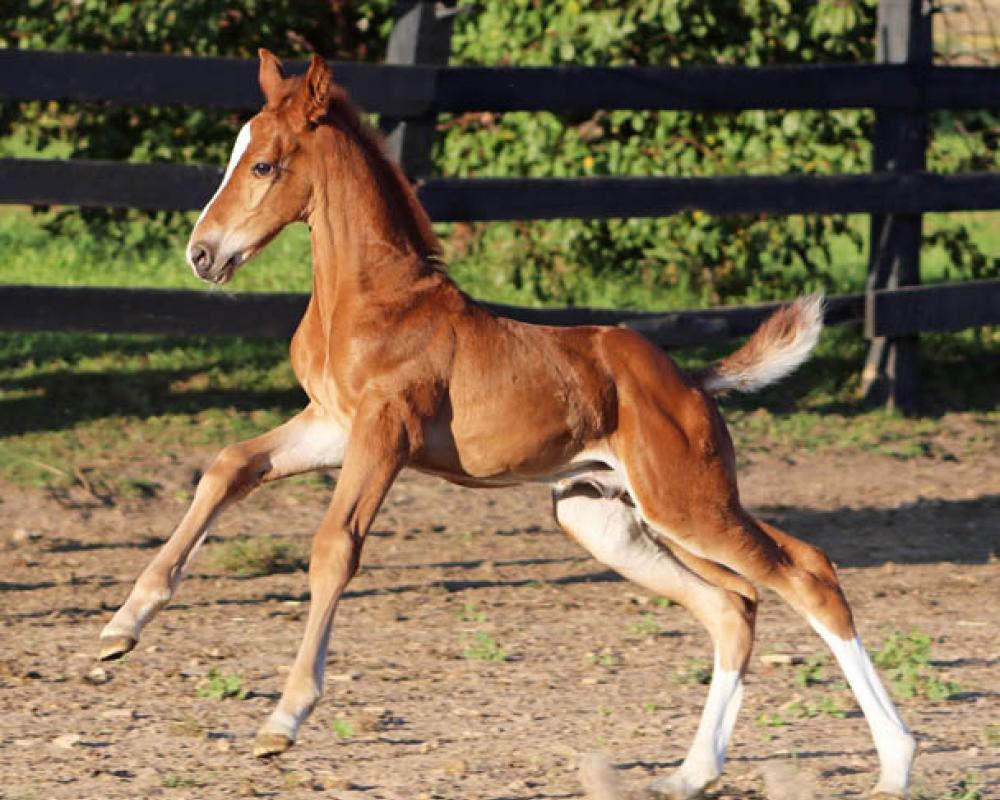 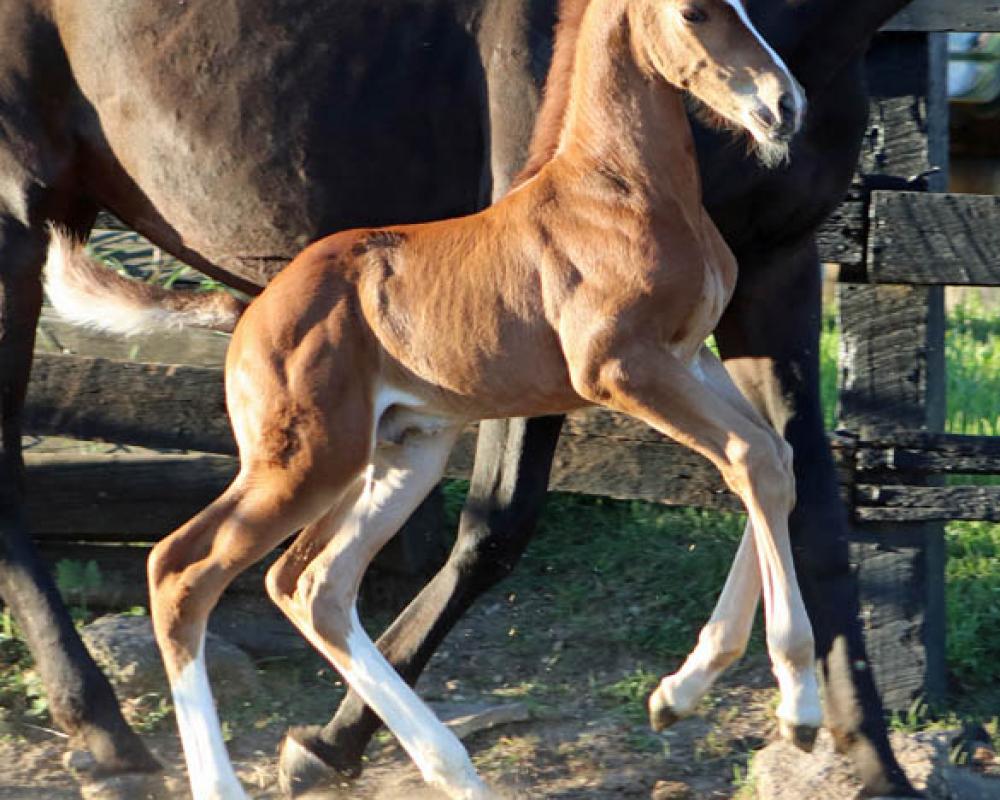 Tall, athletic and stunning Oldenburg Colt with a ton of presence. DOB 9/12/2019

Titanium BEC is a wonderful athletic Oldenburg colt. He has a bold and very friendly personality. This is an uphill moving colt who has a pedigree that should allow him to be a successful competitor in dressage, jumping or eventing. While he was too young to be inspected, he has already had his GOV registration submitted, dna submitted, microchipped and USEF lifetime registration. His price includes board thru up to 60 days post weaning at no additional charge as well as a new negative coggins test/interstate vet health certificate upon departure from the farm. Reasonably priced, short term boarding is available after weaning. We are happy to discuss financing.

Sire, Toronto is an Elite Stallion with the Hanoverian Verband, is a Dutch stallion acquired by the Celle State Stud to further the jumping talent of the breeding program. His performance test single score in jumping was 9.3. This powerful bay stallion descends from the jumping horse producer “Now or Never M,” who is stationed in Holland. Toronto's grandsire is the prepotent Voltaire, a consistent sire of international jumpers with temperaments of gold. The damline is also very interesting - Toronto's damsire is Belisar by Saros xx, who is a full brother to Swazi xx, the sire of the Trakehner stallion Consul.

Toronto gained the following scores at his performance test; character 8, temperament 8, willingness to perform 8, conformation 8, trot 6.33, canter 8 walk 7.67, natural jumping ability 9, free jumping 8,83, jumping manner 9, jumping technique 8.67, cross country 10. He won the jumping phase of the test which could be expected because of his outstanding pedigree. Among his offspring produced to date, he has one licensed son, 5 state premium mares, 15 auction horses.

Dam, Razzle Dazzle is a 16.3 hand Hanoverian mare. She is approved both AHS and GOV. At her GOV inspection, she received an overall 7. Razzle Dazzle has produced Foals of Distinction, Premium foals, winning Hunters, Materiale class winners and offspring successfully competing in dressage.

Razzle Dazzle's sire, Rio Grande won his stallion testing and scored equally high in jumping (134 pts) and dressage (130pts.). Rio Grande initially showed dressage, and as a 4 year old, he was Basic Dressage Champion at the Tournament of Champions. Later he showed in the Grand Prix jumper ring with Eric Lamaze, including being on Team Canada when they won the Nations Cup in New York and Toronto in 1995. Rio Grande also won an International Class at the Royal Agricultural Winter Fair and was second place in the Shell Cup Derby at Spruce Meadows. Rio Grande's sire is Raphael who has produced several international show jumpers (Radiator, Robinson). Rio Grande has sired many of the best hunters currently showing in the United States such as Eye Remember Rio, Due North, Rave, Rio Bravo, Rio Bronco & Rio Renoir.