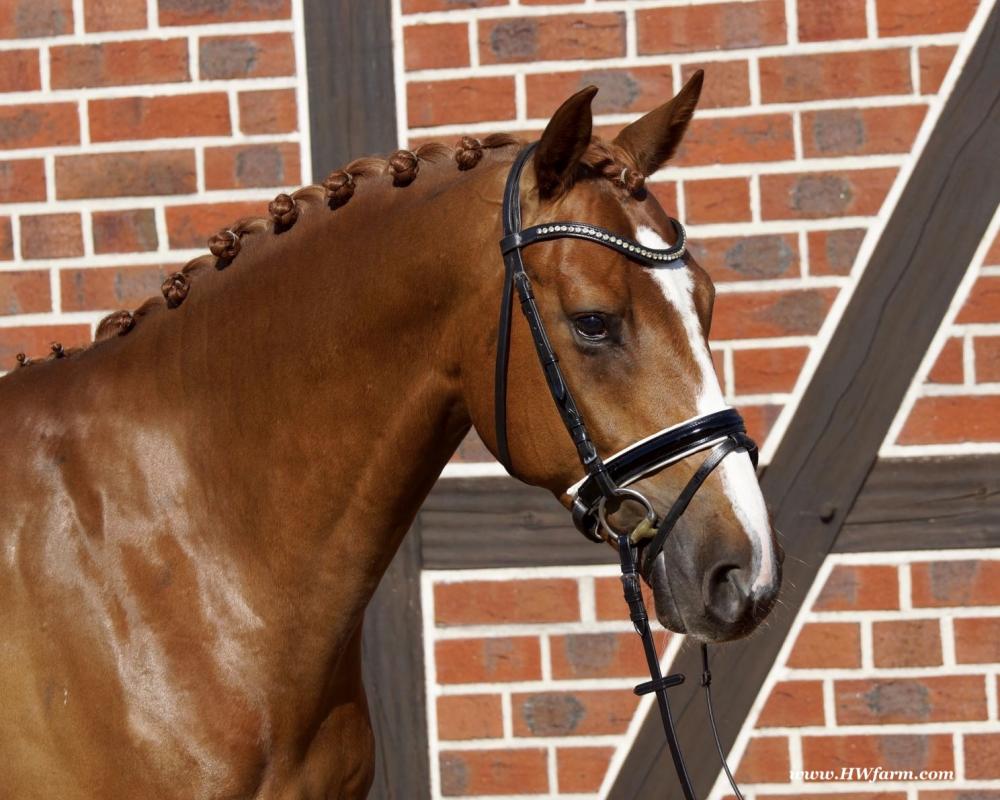 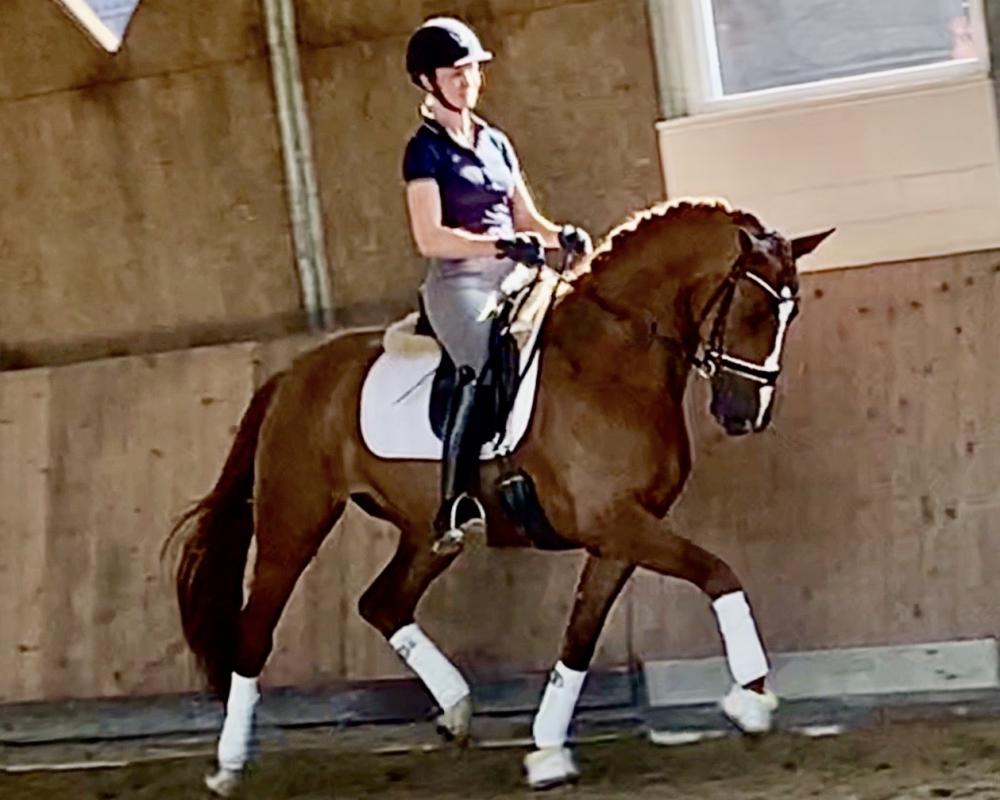 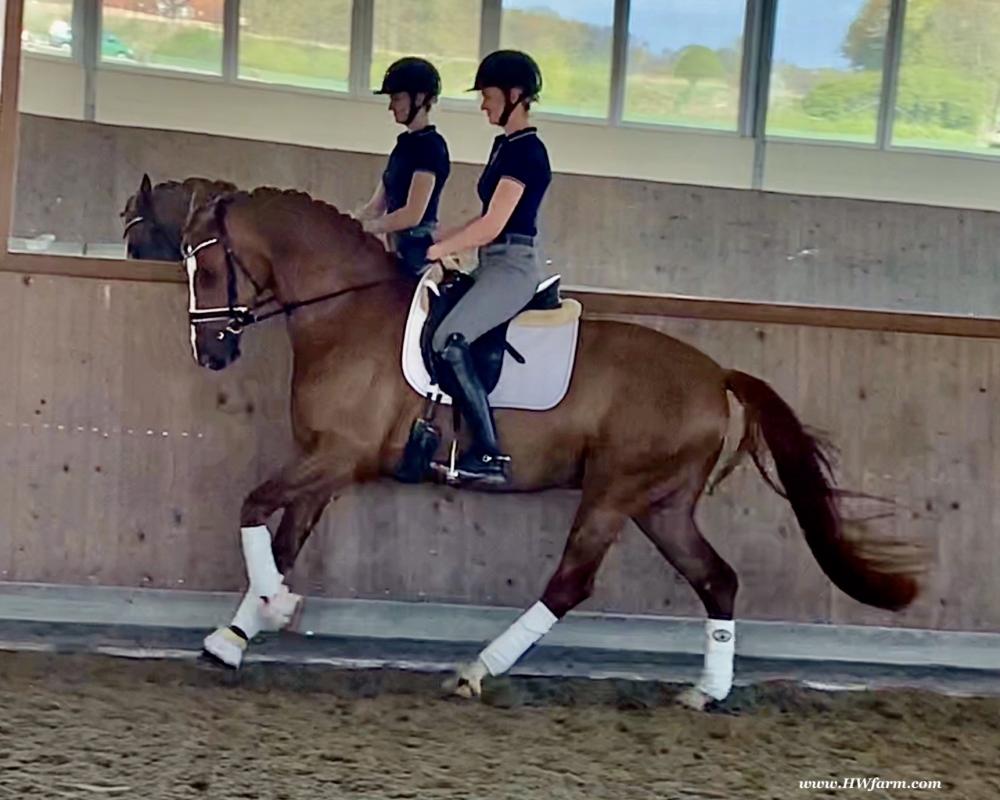 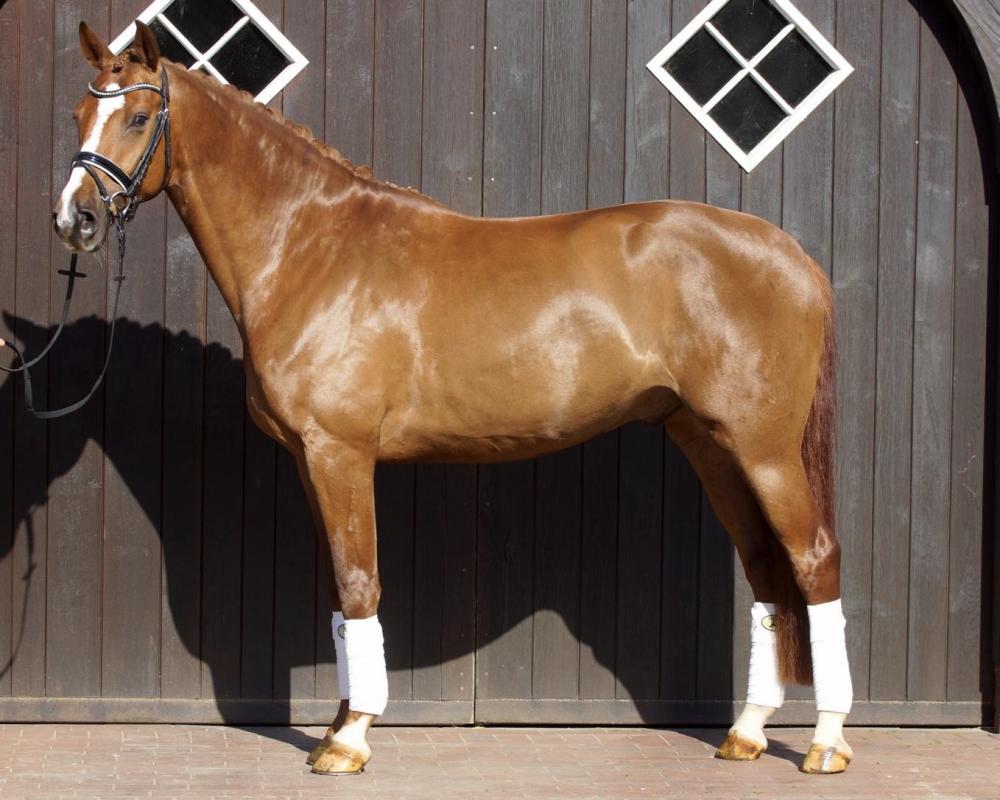 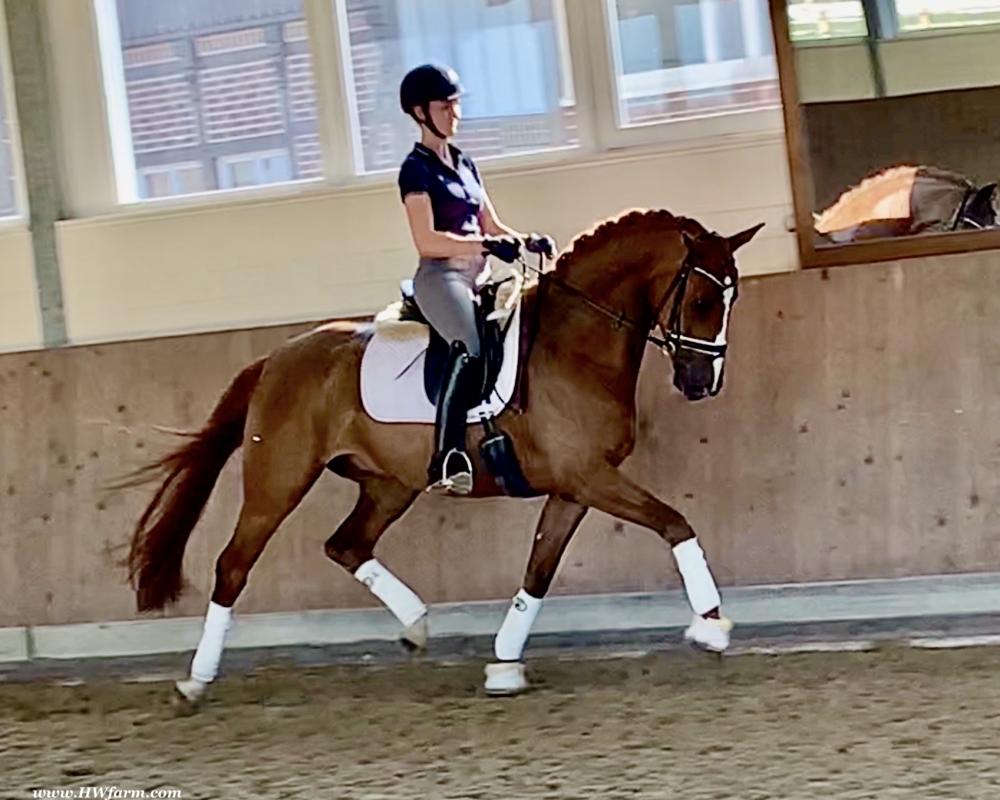 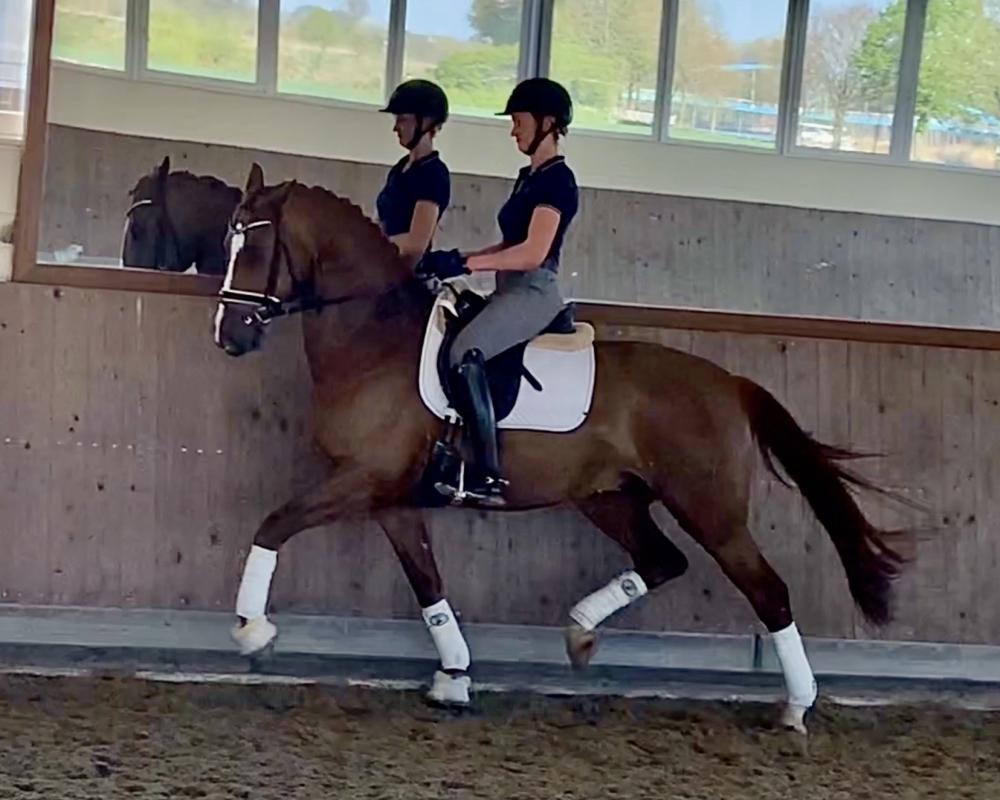 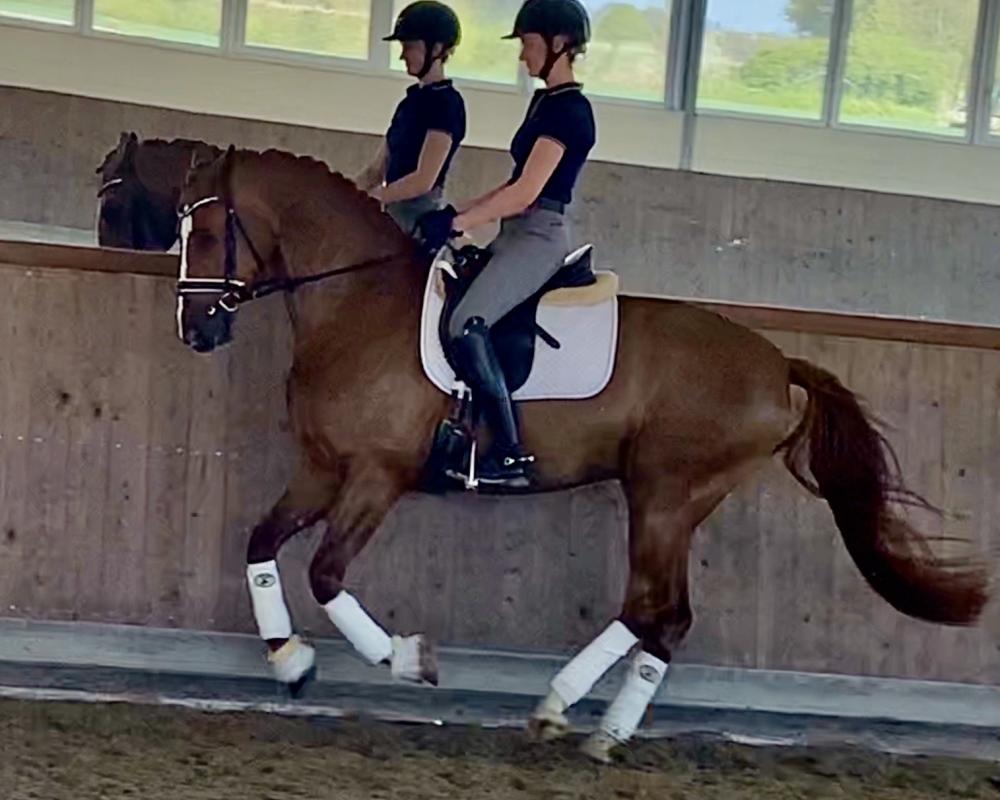 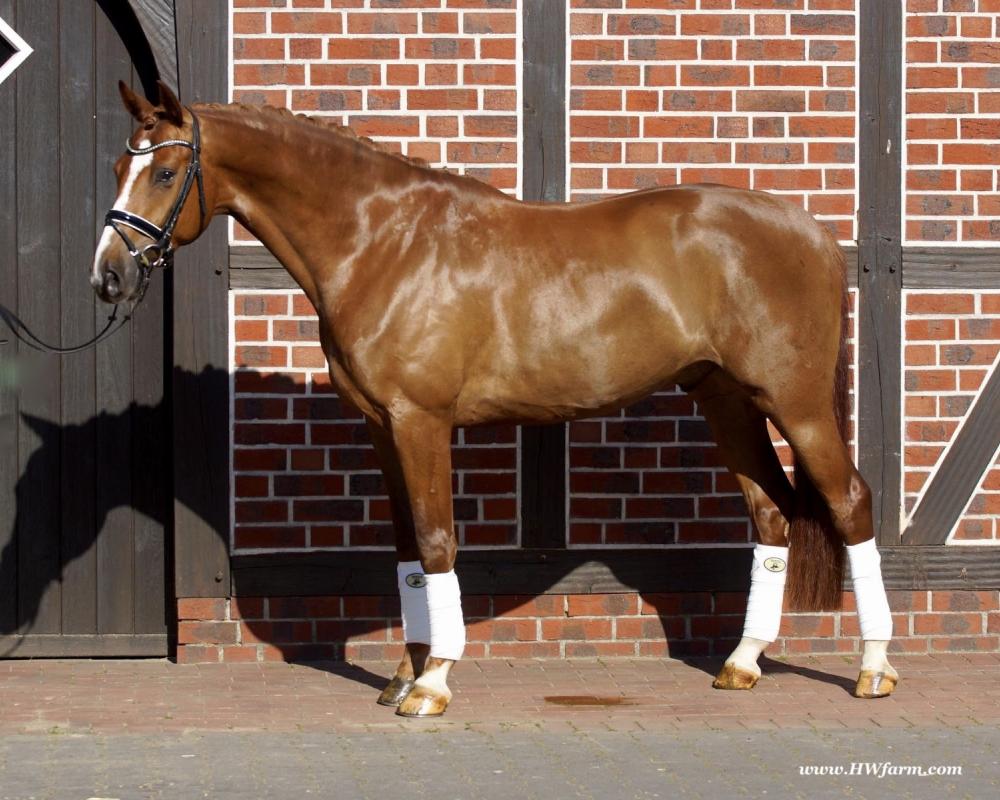 Vimeo HW’s sire is the exceptional stallion Veneno, a dressage stallion with style and elegance. The dark chestnut stallion won the bronze medal at the Westphalian championships in Muenster-Handorf, where he obtained the mark very good plus (9.5) for his trot and a clear very good (9.0) for his canter. Afterwards he entered the final at National Championships. Veneno impressed the judges in all three gaits and his exemplary rideability in his 30-days-test in 2015 in Schlieckau, too. His sire Vitalis was the 2009 reserve champion at his licensing in Münster-Handorf, then went to the State Stud Warendorf and enjoyed great popularity among breeders. Already with his first first crop of foals made the KWPN stallion clear that he is a sire of special quality. 2012 Vitalis was sold in the US and moved "across the pond". 2013 took the Vivaldi-son under the saddle of Charlotte Jorst (USA) at the World Championships for six year old dressage horses in Verden in part and reached the final.

Vitalis' sons are especially attractive. Veneno has what it takes to also be an important sire, because even on the maternal side his pedigree has much to offer.

His dam, St.Pr.St. Diamond Lady (Diamond Hit - gentry - Argentinus - Furioso), previously brought forth seven children and all of them are very successful and promising. Her first offspring was awarded the title of state premium mare and was sold to South Germany. Diamond Ladie's second successor, a black stallion from Dresden Mann, is a highly successful dressage horse in England.

Vimeo HW's dam is by Bundeschampion Quaterback, a stallion who seems like he could only come from another planet - with his light - footed, brilliant movement and perfect cadence, all eyes become riveted on Quaterback when he appears.

Quaterback comes from one of the most successful mare lines of modern day. His dam Passionata is a half-sister of the unforgettable World Champion and double Bundeschampion, Poetin. Her full brothers Samba Hit I to IV put on con-vincing presentations at the Bundeschampionate. Samba Hit I was also a finalist in the 2006 Nürnberg Burgpokal and the sire of Samba's Diamond who became the Champion Stallion of the licensing in Berlin-Brandenburg and Sachsen-Anhalt that same year.

Quaterback's successful advanced (S) level sire Quaterman also participated in several Bundeschampionats and is deemed one of the best sires for passing on good movements in the new German States. The grandsire Quando-Quando took 15th place at the World Championships in Aachen in 2006 under Kristy Oatley-Nist. With a pedigree geared for performance from all sides and from the fa-mous Neustädter P family, all doors are open for Quaterback.

All of these characteristics are impressively documented in the FN's 2004 Pre-dicted Breeding Value statistics.

Licensed for Berlin-Brandenburg, Oldenburg , Hanoverian This exceptional moving young stallion has already started his winning ways. Paired with the talented young rider, Christian Flamm of Hessen, Quaterback galloped away from the competition at the Bundeschampionate in 2006. He started his stallion career by being named Champion of his licensing in Neustadt/Dosse in 2005.

Vimeo HW, with an impressive stallion neck (even as a gelding) and beautiful head, is a stunning horse with lots of personality, he's easy to ride and handle, no wonder with these bloodlines!!!

Supple and elastic, with his free shoulder and huge grundschwung, he swings nicely through his back. He has a superb, rhythmic and clear walk with an amazing over-stride, light in the bridle and easy to sit. This extremely talented gentleman has a bright future ahead and check out that hind leg - reaching far under his body, pushing him up and out, air time to spare. He just glides and barely touches the ground.

Vimeo HW is so much fun, nice, uphill canter which will make the flying changes easy for him. Ridden inside and outside, always giving 100%, no matter what he's asked to do.

This sweet boy, enjoys to work eagerly under saddle, all concentrated on his job in the dressage arena. Very rideable, sane and trustworthy. Vimeo HW loves his personal grooming time and puts his head right in your lap, striving for attention. Perfect Junior or Amateur's horse, but with the quality for a professional as well! You will be the star in FEI classes and at clinics. His bloodlines are very much sought after. He has many of the V, Q, D and R lines you could dream of. He is used to go in the hot walker, loves his shower and solarium time. Stands for the farrier, loads and appreciates grooming time. Vimeo is as sweet as a puppy dog, but with the attitude of a real gentleman. Fulfill your dreams with all his sensational abilities, he will collect the ribbons with ease, high point and more, here we come.