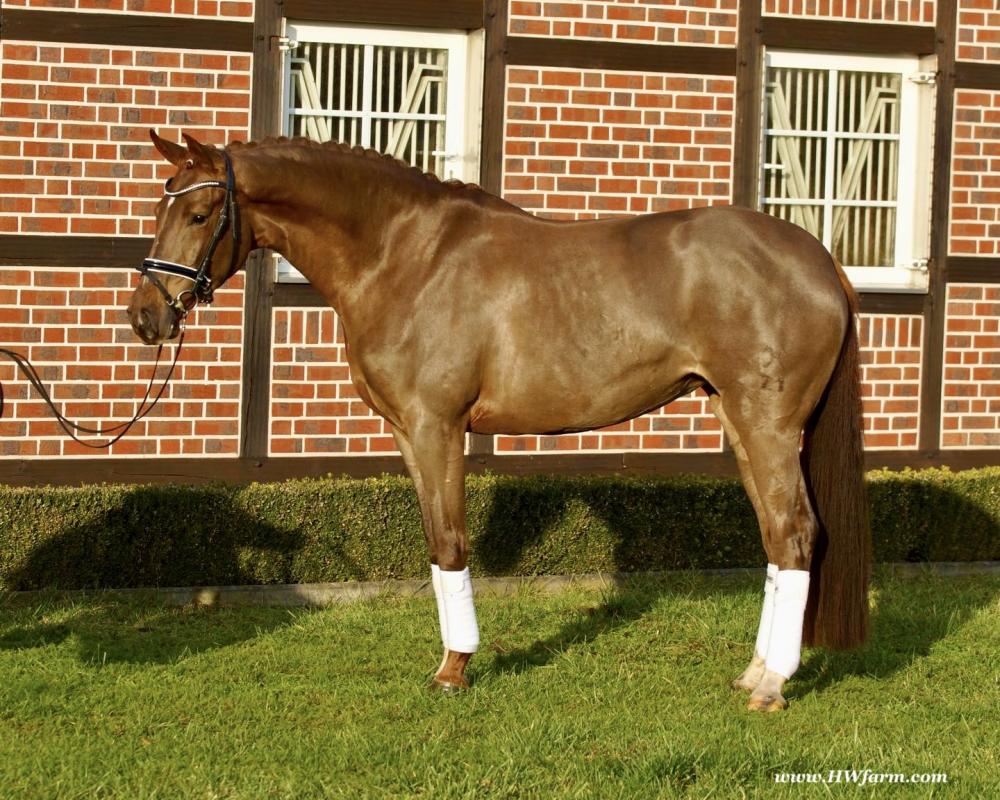 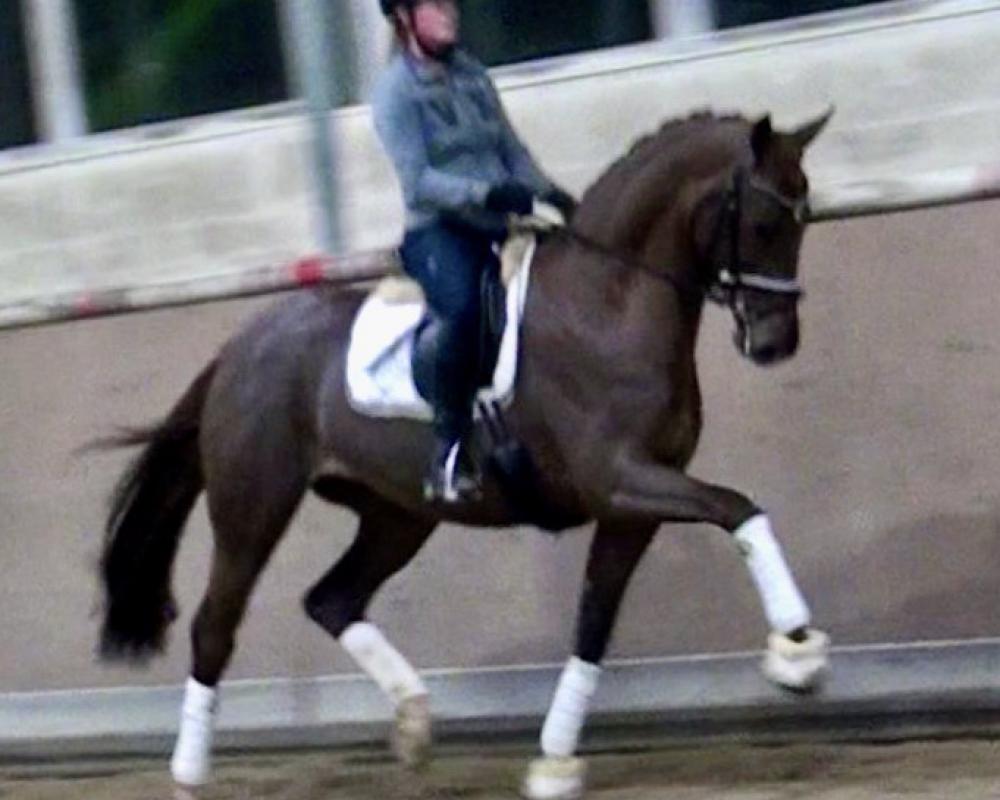 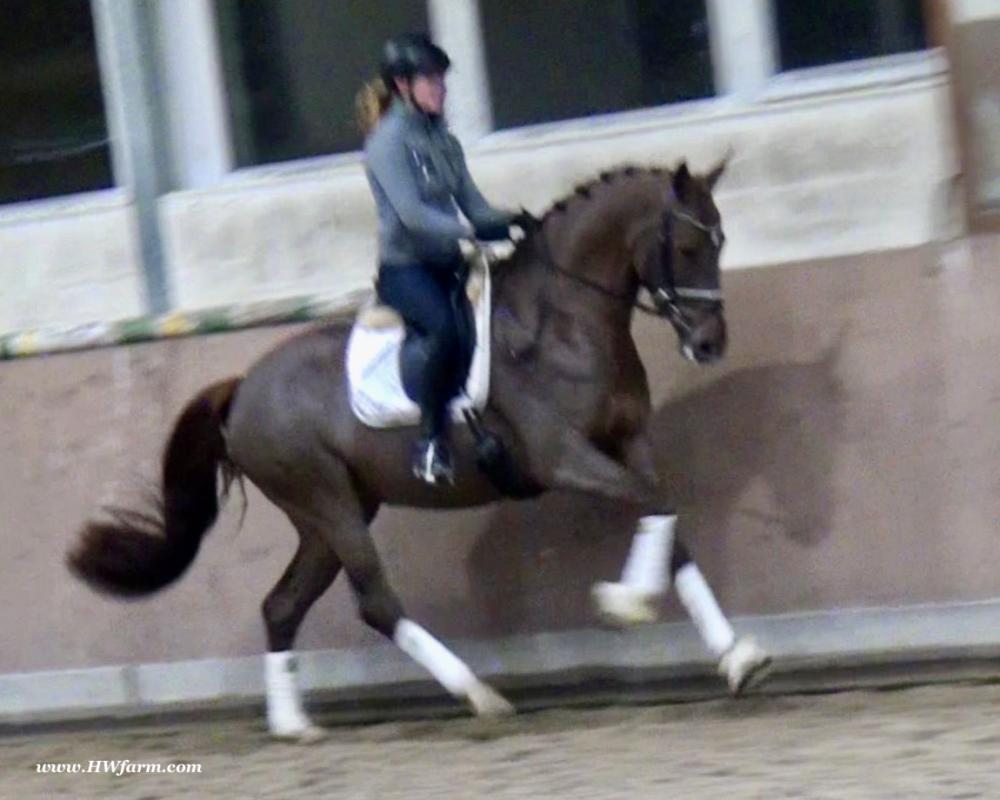 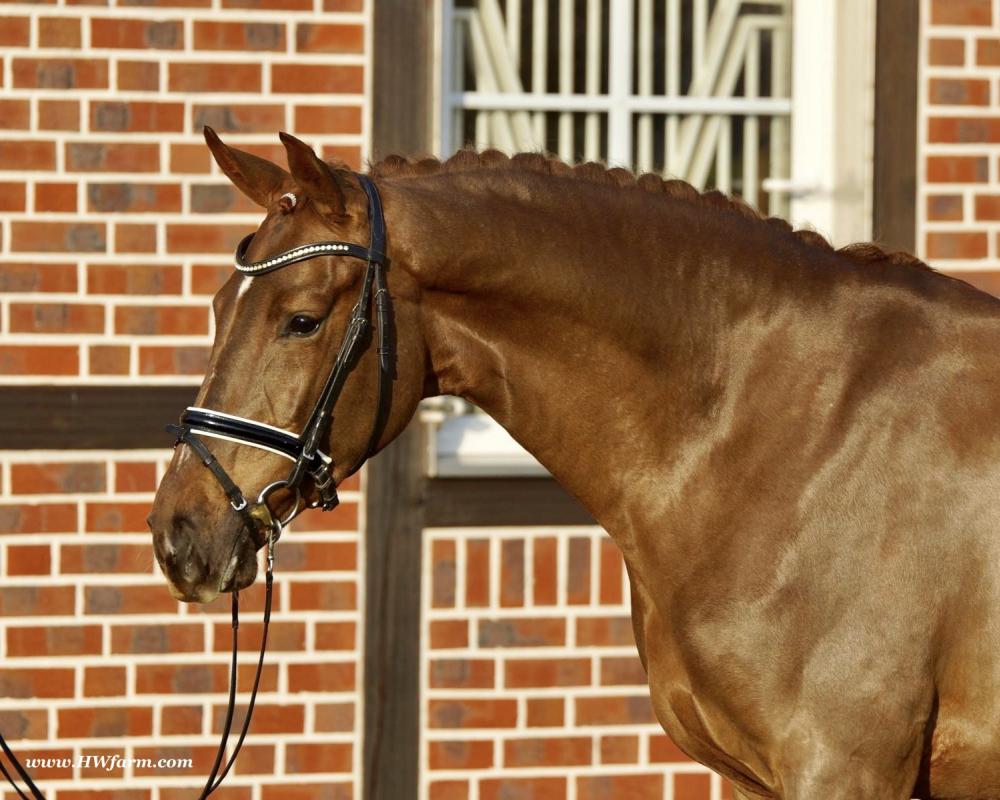 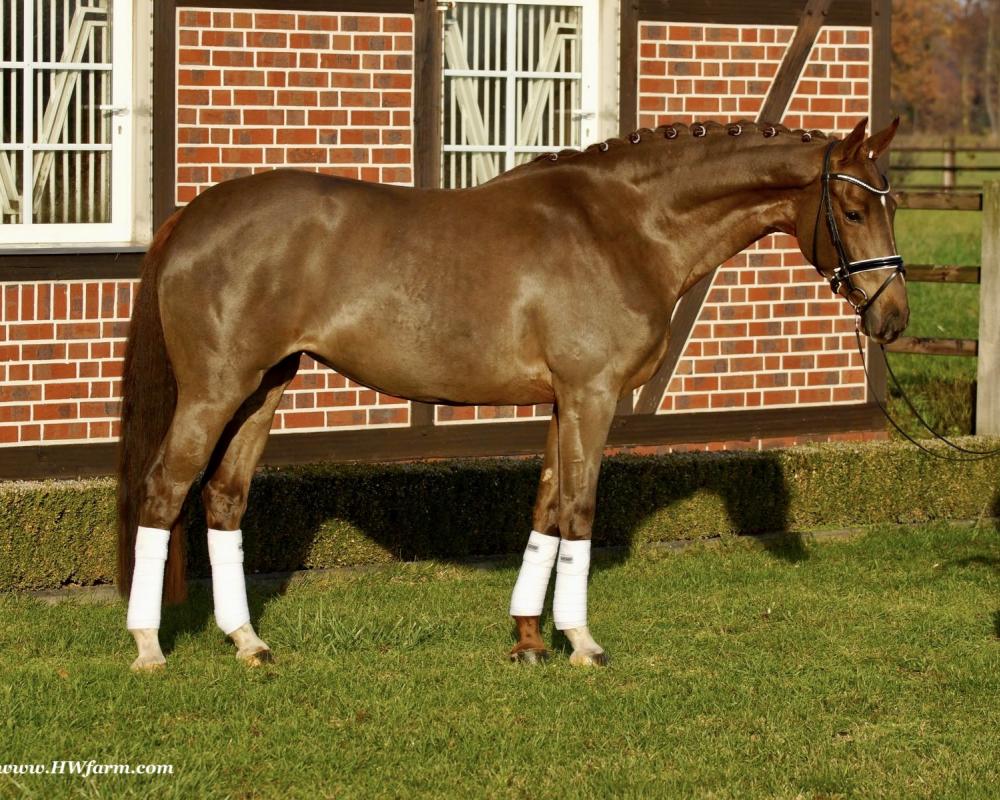 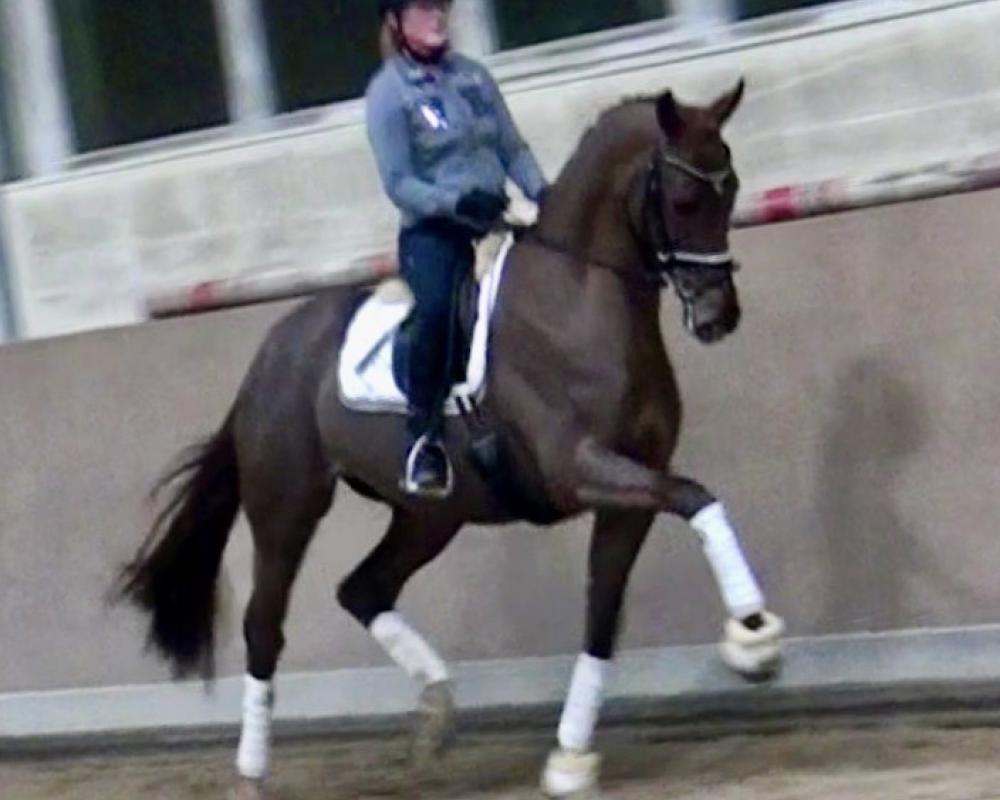 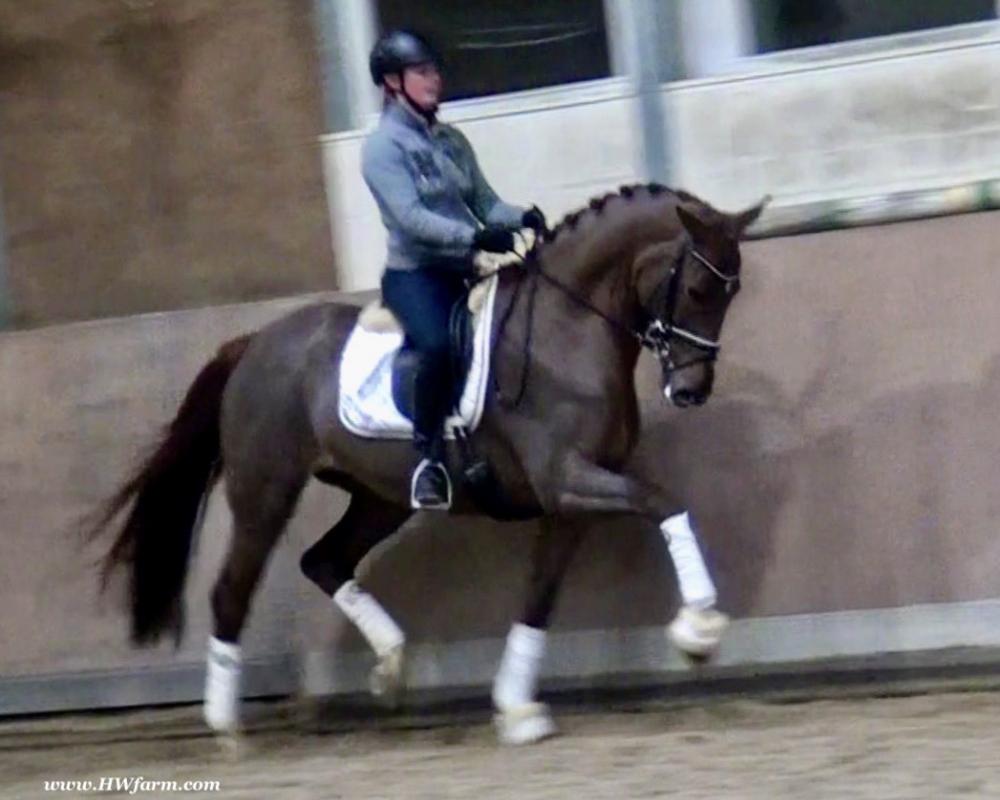 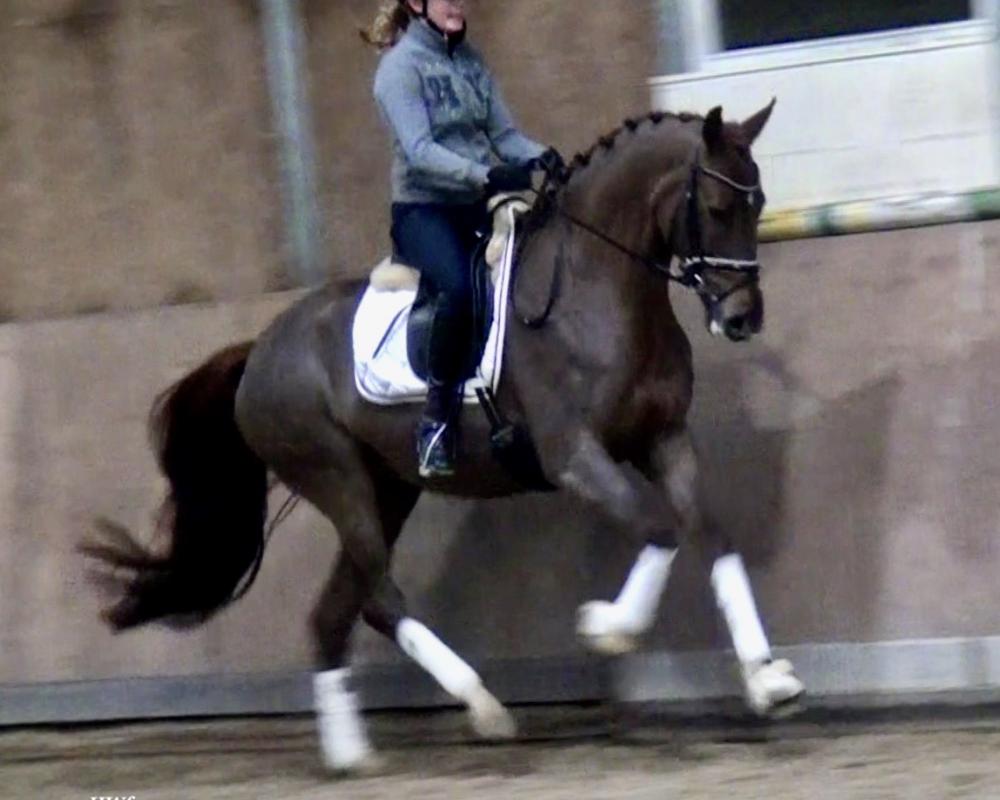 Fantastic FEI prospect, wow - what a beauty with stunning movement and expression!

Vogue HW is a clone to her sire Veneno. His sire Vitalis was the 2009 reserve champion at his licensing in Münster-Handorf, then went to the State Stud Warendorf and enjoyed great popularity among breeders. His first first foal crop made such an impression that it was clear, that he is a stud of special quality.

2012 Vitalis was sold in the US and moved "across the pond". 2013 took the Vivaldi-son under the saddle of Charlotte Jorst (USA) at the World Championships for six year old dressage horses in Verden in part and reached the final.
Vitalis' sons are especially attractive. Veneno has what it takes to also be an important sire, because even on the maternal side his pedigree has much to offer.
Among the successful dressage horses of the parent strain in the S class includes Adrian v. Accent II (until Interm. under
Vanessa Stehl), Bergerac v. Bergamon (up Interm. I under
Ursula Kufner), Bosun v. Bergamon (under Yvonne Tilke),
effect v. Ecuador xx (under Reinhard Schönert), Joy of Jazz v. Jazz (under Christine Kühn), Pandora v. Rivero II (under Jessica Schneeberger) and Rubina v. Rubirando (up Interm. I under Frank Friend). Numerous licensed stallions out of this dam line produced:.. Copperfield v Classiker, Richard the Lionheart by Rubinstein I (up to Grand Prix de Dressage successful and team silver at the European Championships for young dressage riders 2009, Friederike Hahn), Radclife v Rivero II (successful up. S-dressage with Goetz Brinkmann), Sir Caramello v. Sir Donnerhall I, Spirit of the Age OLD v. Stony (international Grand Prix victory by Bernadette Brune).

His mother, St.Pr.St. Diamond Lady (Diamond Hit - gentry - Argentinus - Furioso), previously brought forth seven children and all of them are very successful and promising. Her first offspring was awarded the title of state premium mare and was sold to South Germany. Diamond Ladie's second successor, a black stallion from Dresden Mann, is a highly successful dressage horse in England.

Vogue HW’s dam sire is Feedback. Starting with his outstanding performance at the 2009 NRW licensing where he was crowned reserve champion, Feedback has called a great deal of attention to his qualities as a sire and sport horse.

In 2012, he sired champion and gold medal foals at foal shows in Rhineland and Westphalia. At auctions, his offspring were sought after as well. Out of a Grafenstolz mare, he produced the top priced horse (20,000 Euros) in Rhineland-Palatinate-Saar.

In 2012, with his rider Mathias Bouten he won novice and elementary dressage tests with scores up to 9.2 points. Feedback also qualified for the German Young Horse Championships and was nominated for the World Championships of the five year old dressage horses in Verden.

In 2013, he was placed and victorious in elementary and medium young horse dressage tests.

In 2014, Feedback placed for the first time in advanced level dressage tests.

Feedback's dam, premium mare Scarlett, was first runner-up in her ring. She is the dam of the premium stallion Fiderhit, St.Pr.St. Fleet Street (who is the dam of Quotenkönig, second runner-up of the NRW-licensing in 2011) and of more champion foals.

Feedback's dam sire, Sandro Hit, is the sire of the record-breaking mare Poetin and of champion stallion Stedinger, not to mention numerous well-known top stallions and dressage horses worldwide. The Holstein C- and L-lines perfect the pedigree in the third and fourth generations.

The successful dam line produced "Dahlhoff" (by De Niro) as well who was a premium stallion of the NRW-licensing in 2012 and half brother of Quotenkönig.

Vogue HW herself, is an extremely fancy lady. Beauty, elasticity, and suspension outline this stunning creature. Three rhythmic, big, expressive gaits - that will blow any and all competition out of the park.

She is fabulous and easy to ride, super nice to sit and light in the bridle.

Ideal for a AA, young rider, or professional alike, everybody wants fun! Vogue HW, equipped with phenomenal competition genes, is a horse of amazing quality and super fancy mover who knows to impress due to her type and work ethic. This stunning horse has it all, big stallion neck (even as a girl!), a total dream come true.

Her hooves barley touch the ground. She loves to please her handler and rider and is a fast learner. This lady eagerly works under saddle and does an excellent job, with her free shoulder and huge suspension, she swings nicely through her back. She is breathtaking to watch in the dressage arena and with her quick, far reaching hind leg, passage and piaffe will come naturally to her. Vogue HW is supple and has a ton of air time.

With her great ride ability, she makes a lasting impression on whom ever sees her. She loves her personal grooming time and puts her head right in your lap, striving for attention and searching for treats. With this horse, you will be the star in FEI classes and at clinics, the judges and onlookers will remember her where ever she goes.

Her bloodlines are very much sought after, she is your ticket to the top! Vogue HW is used to go in the hot walker, loves her shower and solarium time. Stands for the farrier, loads and appreciates grooming time.

She is a superb Young Horse Candidate, just what the judges are looking for and will make her way up the levels.

Price is including import and quarantine to NY, check out her video clip!!!