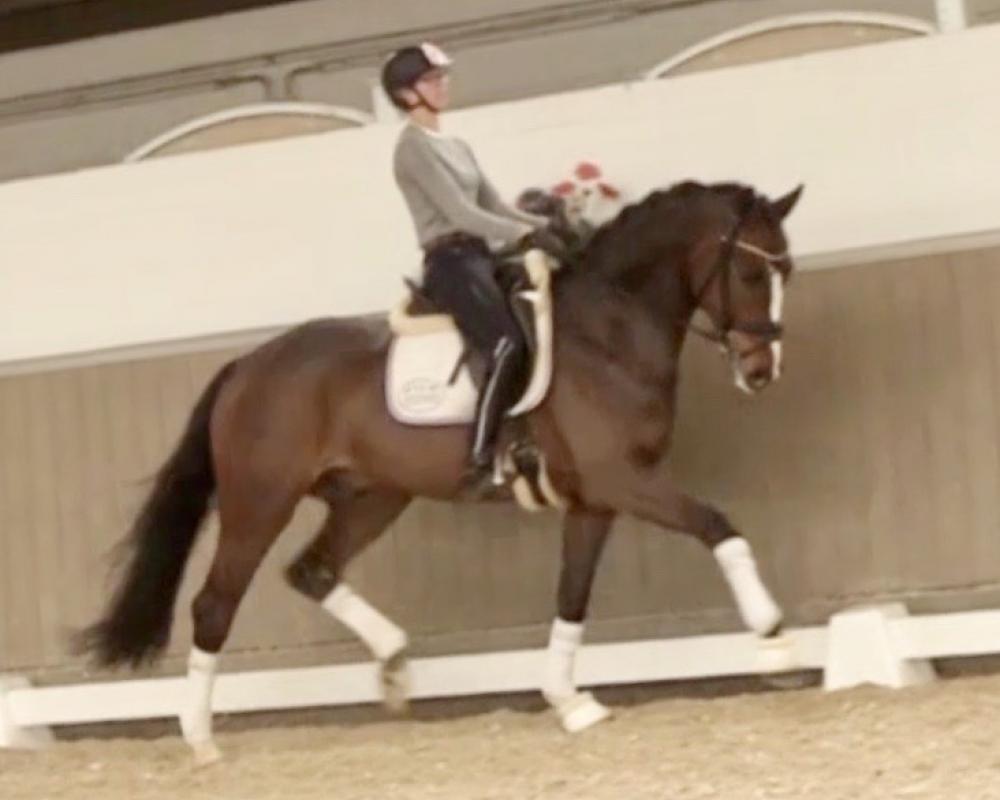 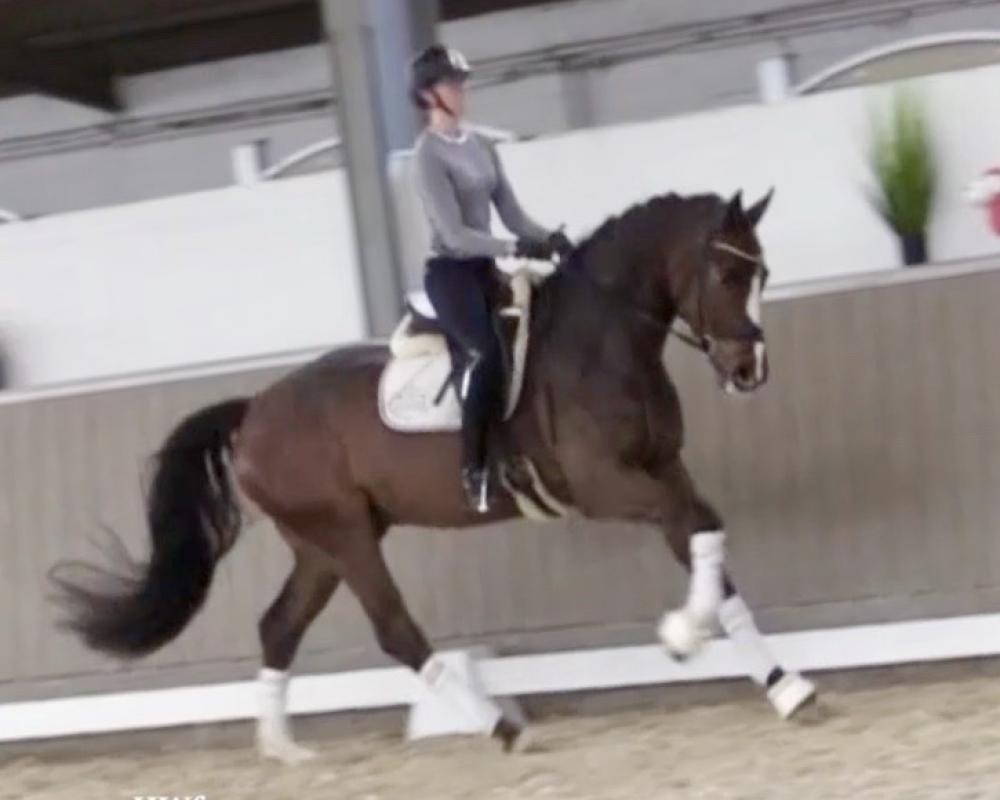 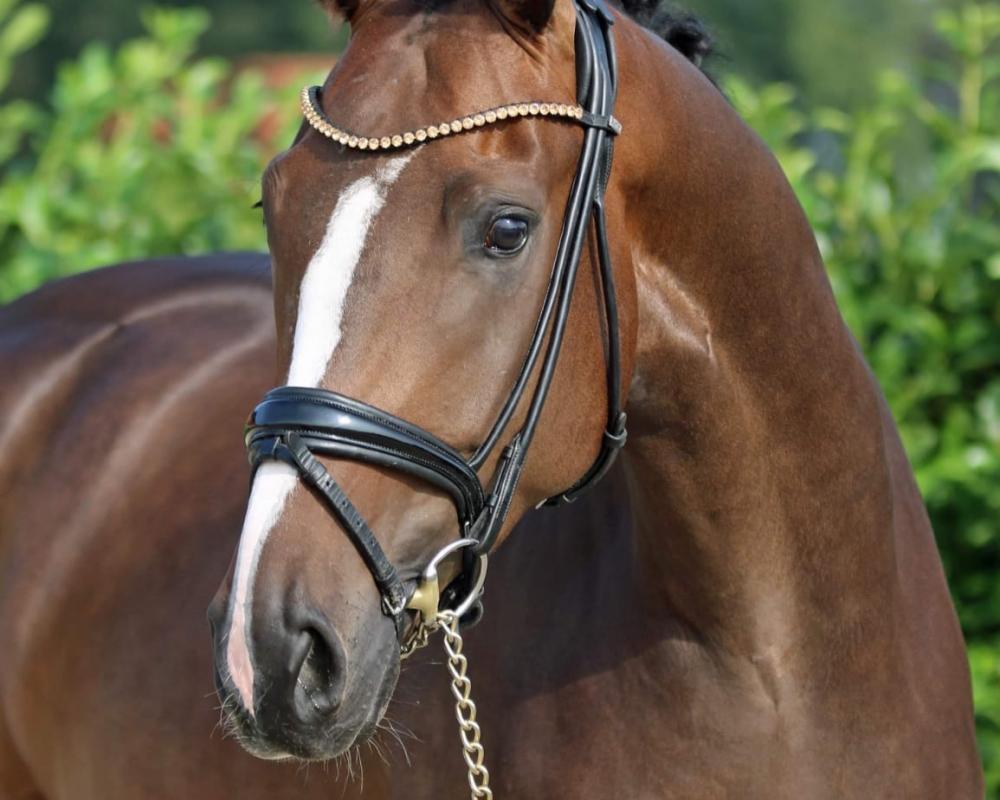 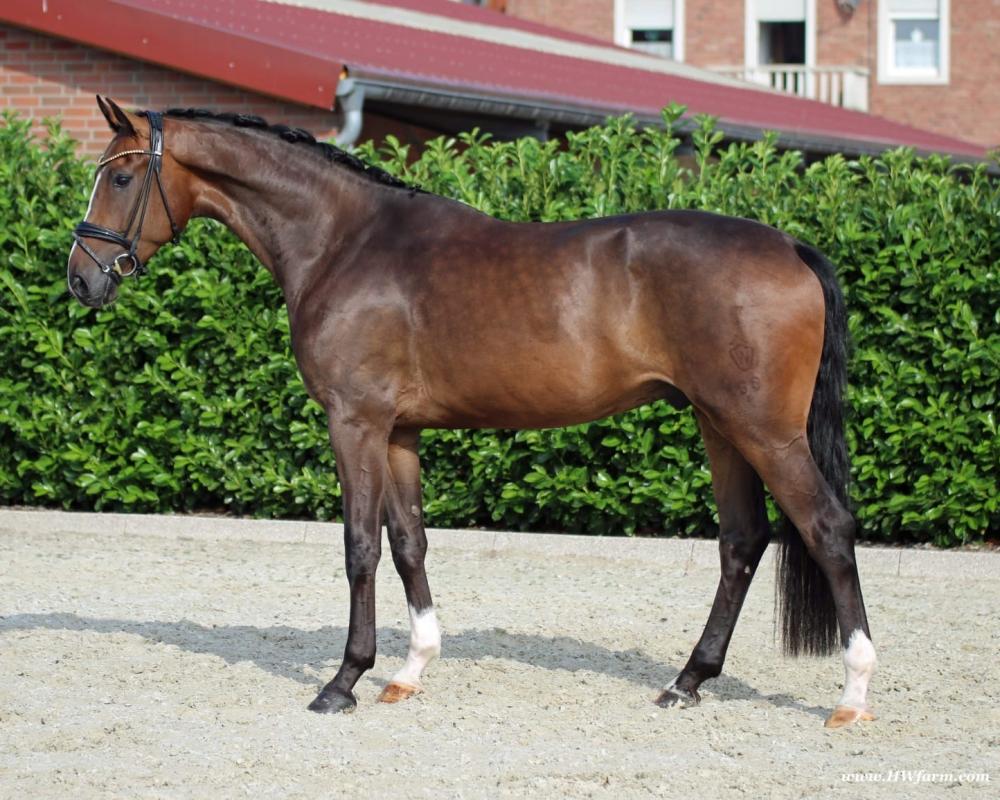 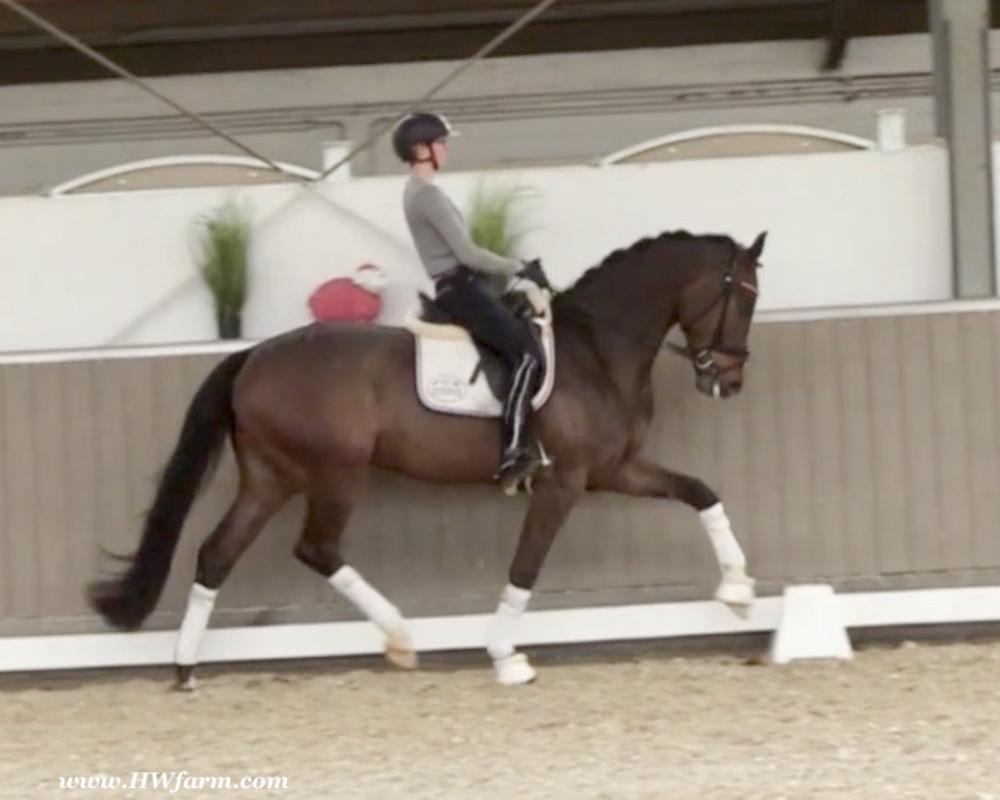 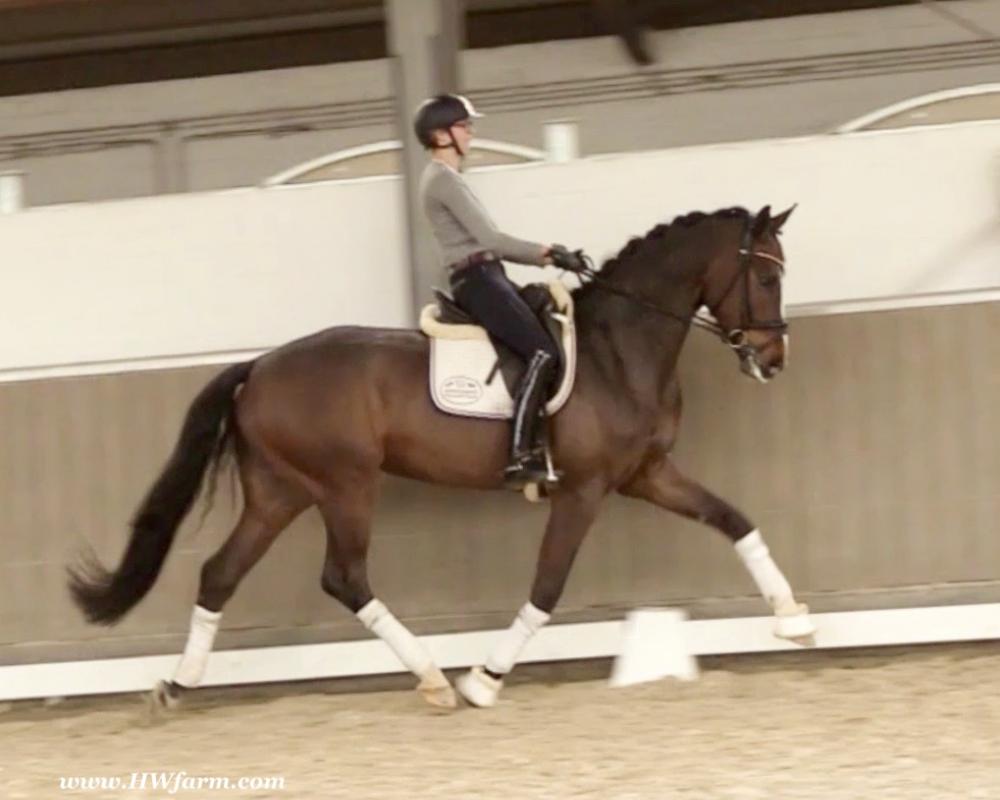 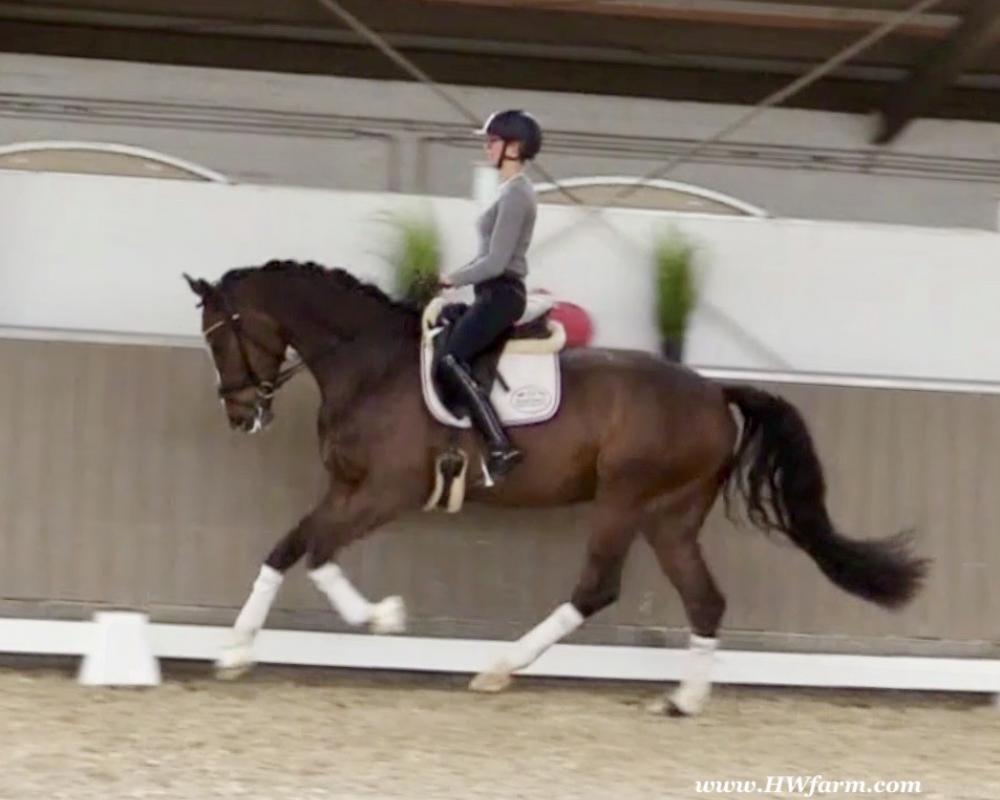 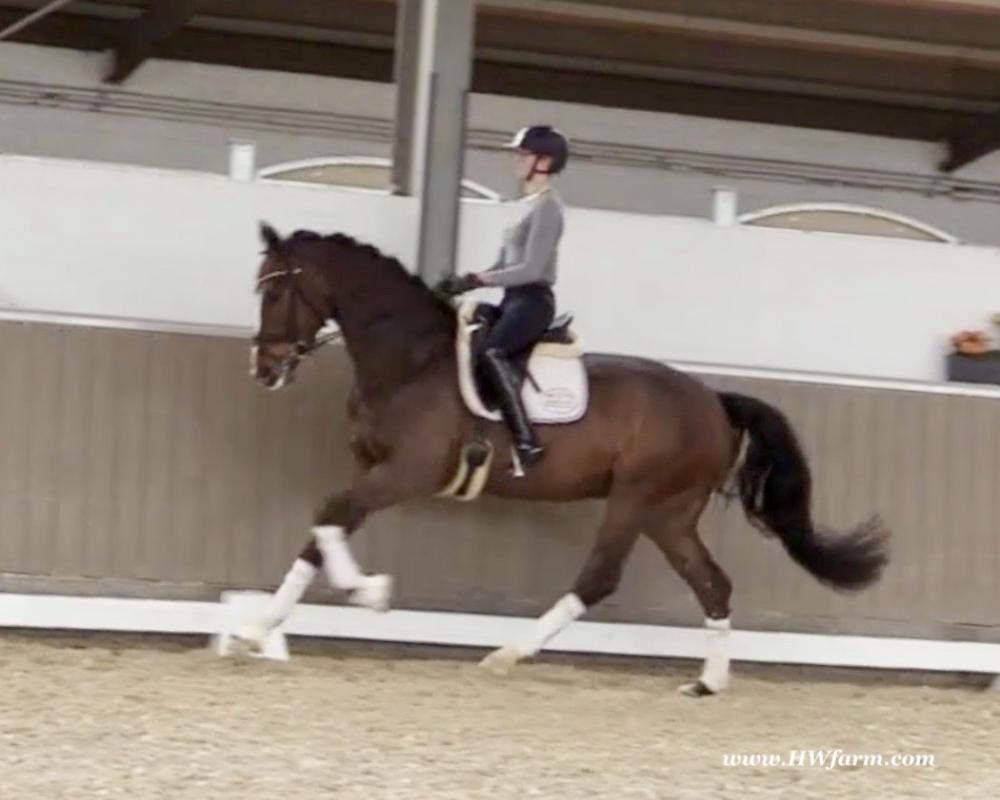 Zonik Hit HW is by the famous stallion Zonik One – a stallion with world wide
radiance.This Danish stallion at stud in Mühlen boasts a very modern build and
captivatingly powerful paces. Zonik was sired by KWPN champion stallion Zack and he has a first-rate dressage pedigree. Zack, sired by Vice Dressage World Champion Rousseau, produced three successive KWPN champions and he won the Danish Championship for Six Year Old Dressage Horses qualifier in 2010 with a score of 9.22.
In Oldenburg, he has produced his first approved sons and one of his fillies received the top score of 10.0 for trot in the qualifier for the German Foal Championship.
Zonik's dam won the bronze medal at her mare performance test, his granddam competed in the final of the Danish Four Year Old Riding Horse Championship with Andreas Helgstrand and has won classes up to Prix St. Georges level. His dam's sire, Romanov, is a Grand Prix winner. He won the VTV Dressage Stallion Award in 2008 and his son Honnerups Driver was the absolutely brilliant Dressage World Champion in Verden in 2009. Our own premium breeding stallion, Don Schufro, contributes quality genes in the third generation. Don Schufro won the Olympic team bronze medal in Hong Kong, produced the Oldenburg champion stallion of 2010 and Uno Donna Unique, World Champion of Six Year Old Dressage Horses. He has topped the FN dressage breeding stallion index for seven years in succession and produced numerous advanced dressage and Grand Prix horses such as Donna Asana, Bocelli and Diamond Hit. Zonik's dam line has brought forth many Grand Prix horses. Zonik is a quality stallion with a brilliant future!
Zonik Hit HW’s dam sire is the world famous Samba Hit.
The Brandenburg state stud bred and owned licensed stallion Samba Hit I has passed away on Sunday 11 February 2018. He was about to turn 20 years old in spring.

Samba Hit I became unwell on Sunday and was transported to the equine clinic. The veterinarians could not save the stallion who suffered from blood circulation problems.

Samba Hit was born in 1998 in Neustadt/Dosse and became one of the state stud's most popular breeding stallions alongside Quaterback. He was by Sandro Hit out of Poesie (by Brentano II x Gotland x Sekurit). The dam also produced World young horse champion Poetin.

He was licensed at his home in Neustadt/Dosse in 2000 and was named the champion. He did his 70-day Stallion performance Test at the same location, scoring 133.54 points to finish first out of 21 participating stallions. He obtained a dressage index of 149.02 points and a jumping index of 99.18 points.

In 2005 the duo moved up to small tour level and stayed there for three years. They were third in the 2006 Nurnberger Burgpokal Finals in Frankfurt. In 2008 they did their first national Grand Prix class, but dropped back to small tour a few months later. Between 2009 and 2012 the stallion competed lightly in a mix of small and big tour classes at regional shows. The stallion did his last show in Neustadt/Dosse in July 2012 under Lena Feistkorn.

Zonik Hit HW, with the finest stallion looks, huge neck and beautiful head, is a stunning horse who has all the personality a person could ever hope for, he's easy to ride and handle, no wonder with these bloodlines!!!

Supple and elastic, with his free shoulder and huge grundschwung, he swings nicely through his back. He has a superb, rhythmic and clear walk with an
amazing over-stride, light in the bridle and easy to sit.
This extremely talented gentleman has a bright future ahead.

Zonik Hit HW is so much fun, nice, uphill canter which will make the flying changes easy for him . Check out his amazing hind leg, reaching far under his body and lifting it up in the air with ease. He just glides and barely touches the ground. Ridden inside and outside, always giving 100%, no matter what he's asked to do.

This sweet boy, enjoys to work eagerly under saddle, all concentrated on his job in the dressage arena. Very rideable, sane and trustworthy.
Zonik Hit HW loves his personal grooming time and puts his head right in your lap, striving for attention.
Perfect Junior or Amateur's horse, but with the quality for a professional as well!
You will be the star in FEI classes and at clinics.
His bloodlines are very much sought after.
He is used to go in the hot walker, loves his shower and solarium time.
Stands for the farrier, loads and appreciates grooming time.
Zonik Hit HW is as sweet as a puppy dog, but with the attitude of a real
gentleman. Fulfill your dreams with all his sensational abilities, he will collect the ribbons with ease, high point and more, here we come.

Priced including import and quarantine to NY, check out his video clip!!!