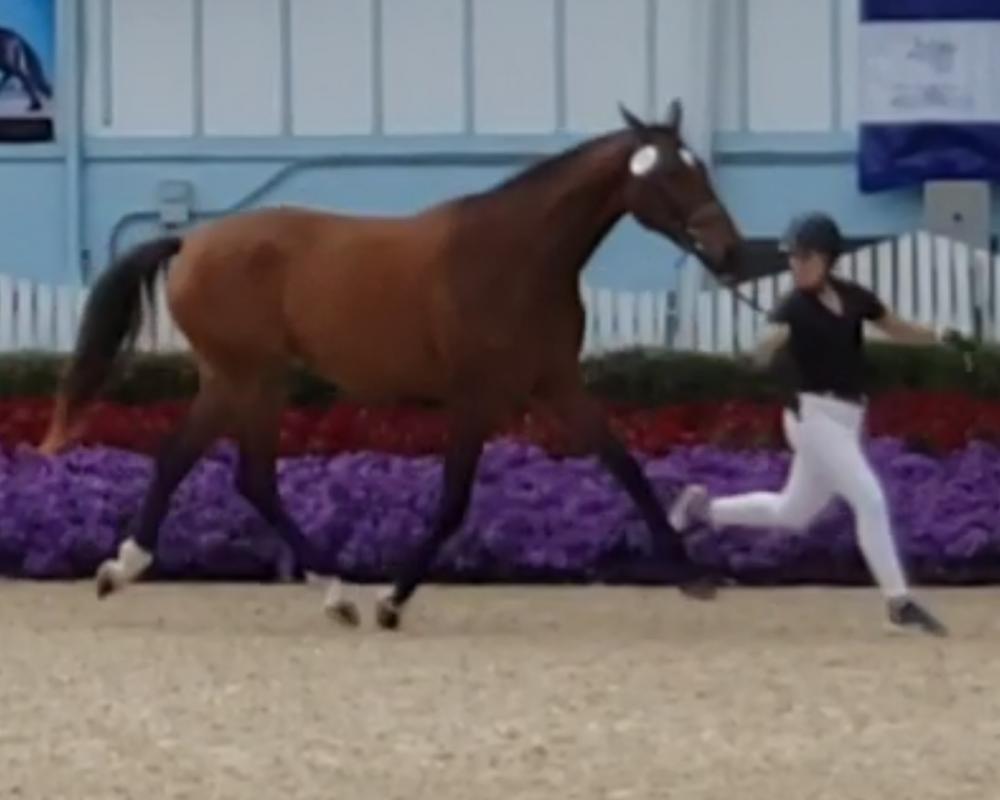 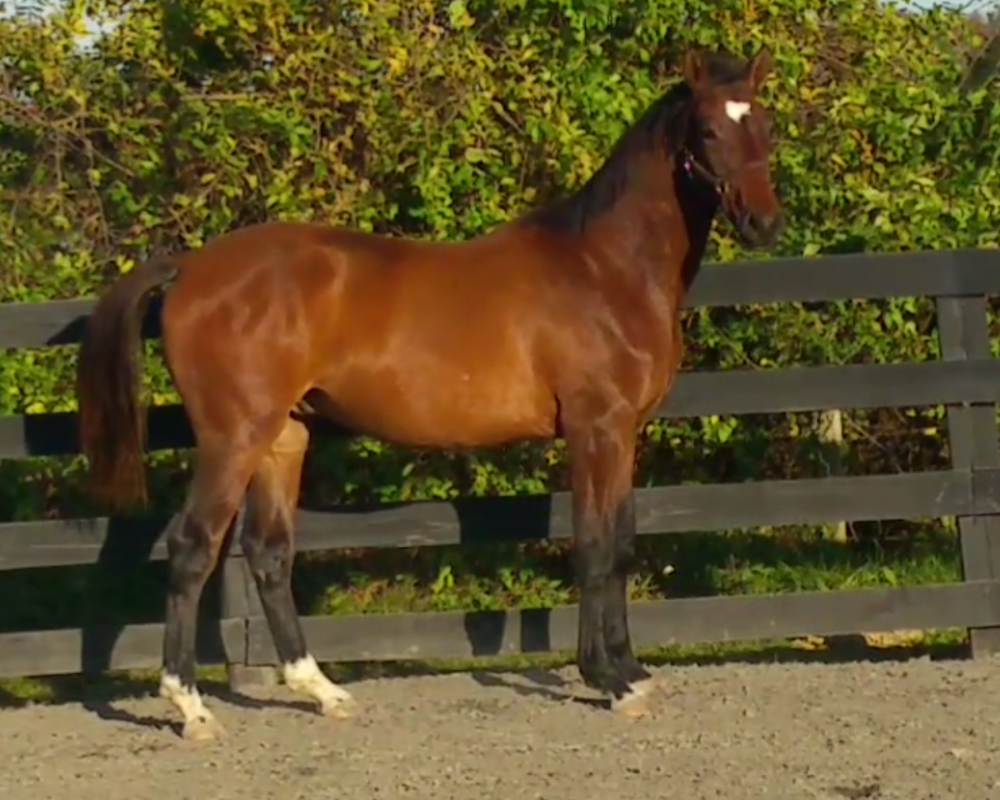 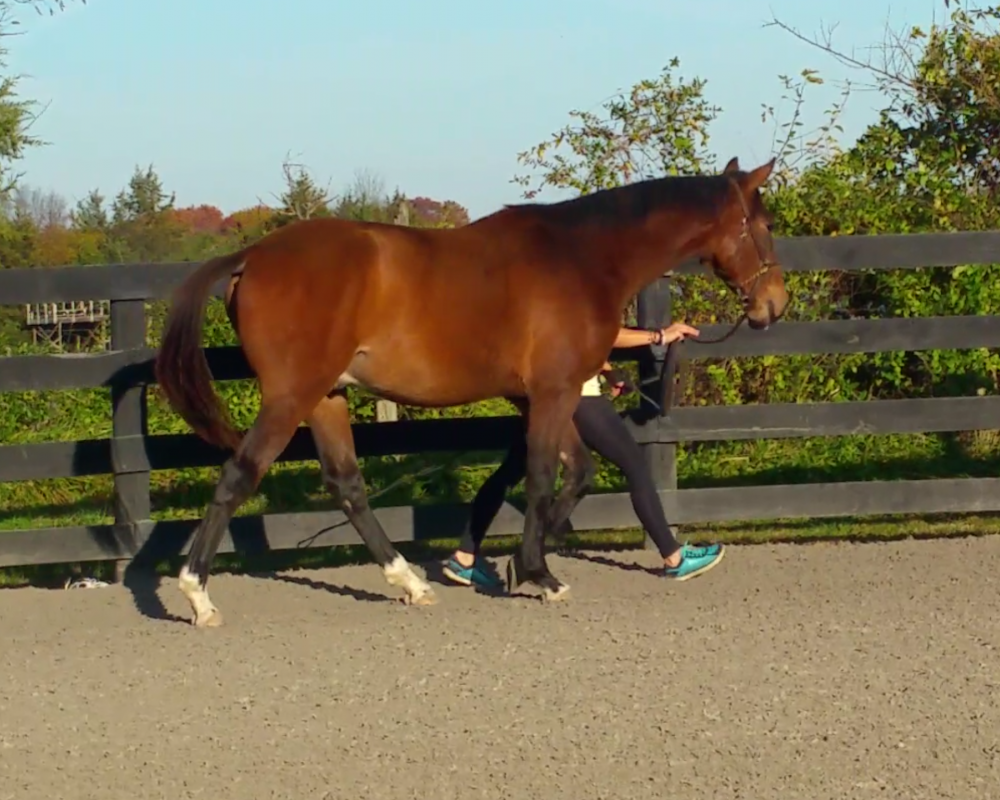 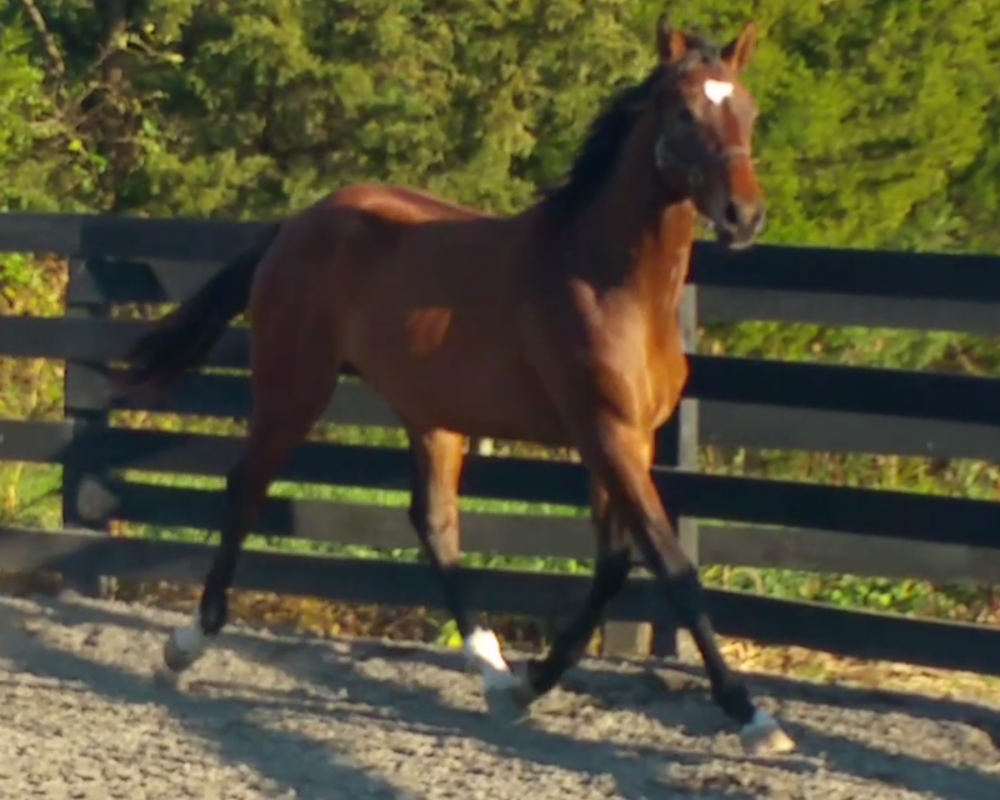 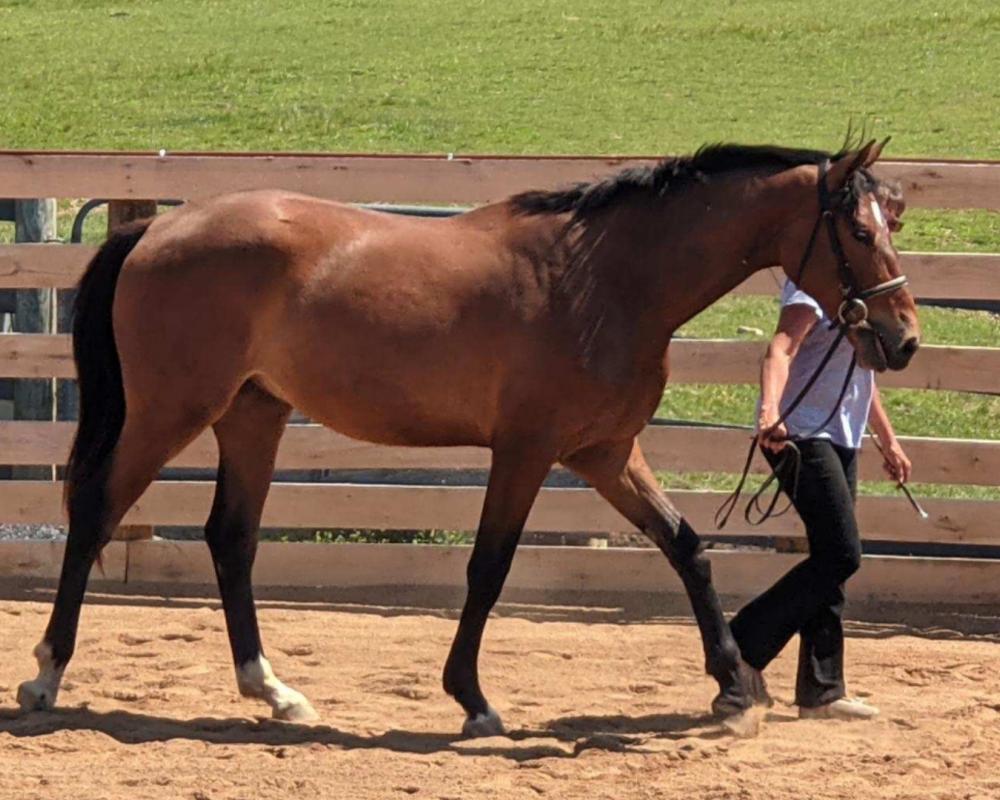 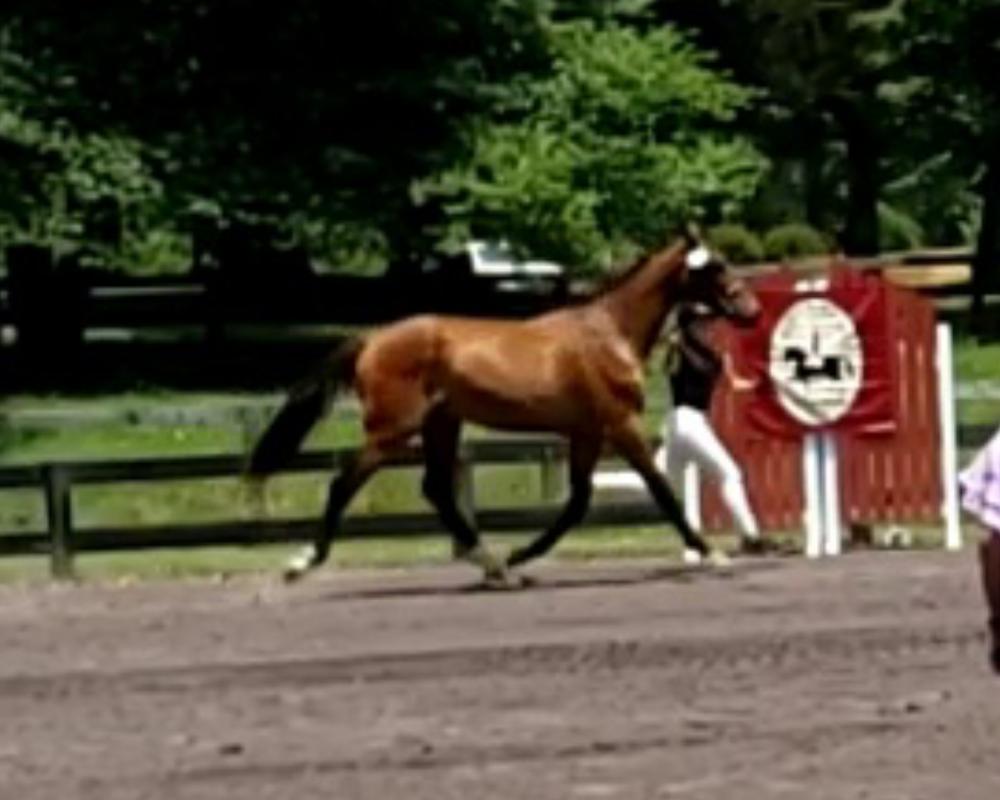 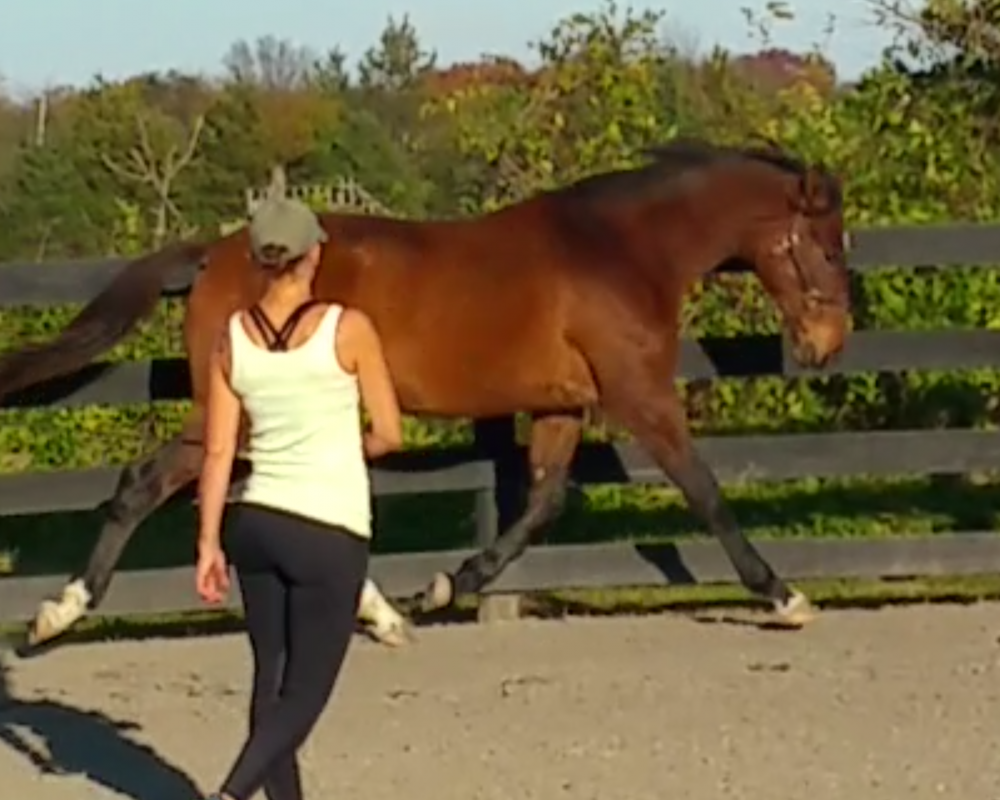 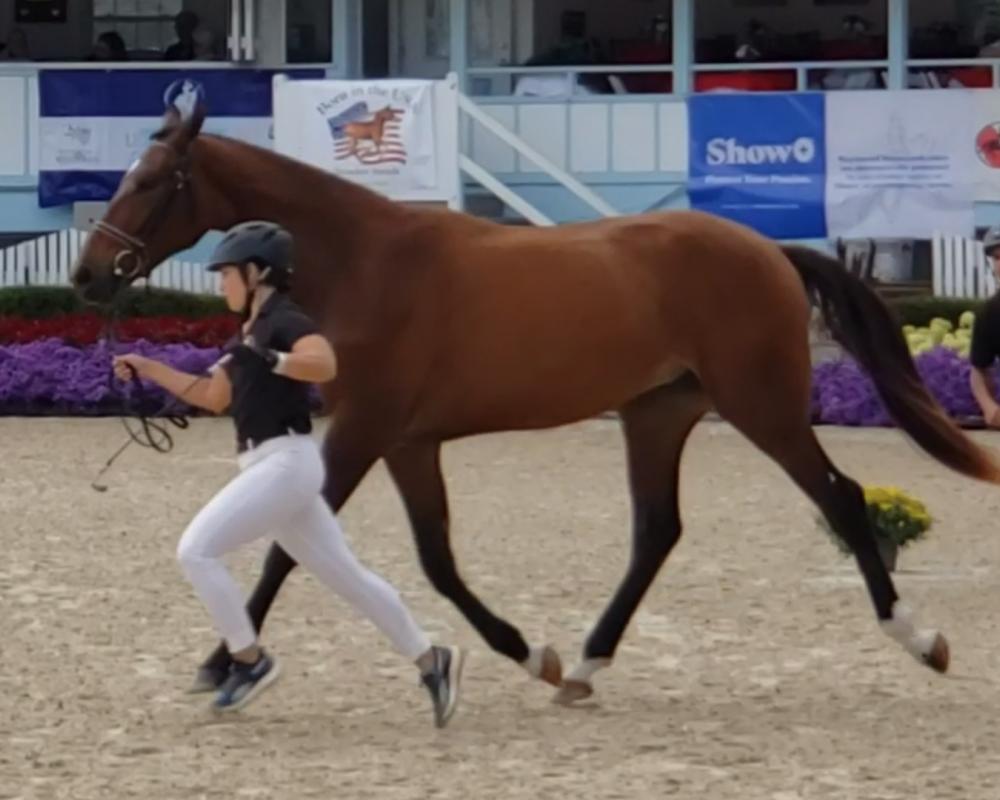 2019 Bay Gelding 16.1h and growing! He is becoming a gentle giant, super disposition and such potential!

This horse is priced to sell! He has the potential to be an upper level competitor for an amateur or professional. If you want a 6 figure horse at a 5 figure price now is the time to move on him.

Snappy Ripartee is 3rd place in the country for USDF Horse of the Year 2YO Colts/Geldings with a median score of 76.675%!

He is maturing beautifully and he will have a price adjustment when he is under saddle in spring of 2022.

Ripley made a name for himself at Dressage at Devon 2021!

With a score of 79.8% he placed 1st in the Danish individual breed class. Comments on his conformation earning 7.8 "fair muscle, bone and balance". Earning an amazing 8.8 for his walk his comments were "shows ground cover, reach and swing". Scoring 7.8 for his trot "covers good ground". His general impression comments were "sport type at awkward stage of growth, could show even better quality of trot" clearly the potential is there. This youngster has a lot of growing to do and when he matures he is going to be an amazing athlete!

Ripley represented Wildest Expectations in the very competitive Breeder's Group class placing an impressive 3rd with a score of 78.85%. Some of his comments were "strong topline" for conformation scoring 7.8, "clear rhythm and overstride" for his walk earning an 8. For his trot he scored 7.9 with comments "good shoulder freedom". For general impression he scored 7.9 with comments "well mannered and many strong features.

Ripley placed 6th in a large open class for 2yo colt/gelding with a score of 77% which qualified him for the USDF Championship Series class. He qualified at every show he attended this year! Scoring 8's for conformation his comments included "overall well balanced, fluid topline, smooth loin connection" his comments at the walk "good ground cover", his trot "long strides", for general impression "nice riding type!"

Although Ripley didn't place in the USDFBCS class at Dressage at Devon, due to a low level colic episode the evening before, it was clear he belonged in that level of competition. His comments included "balanced frame, good joints, clear saddle position, clean overtrack with swing and reach, handsome horse"

He has a cat-like swaggering walk. Beautiful, uphill trot. Relaxed, ground covering canter. He is so soft and light transitioning through his gaits. His over track at a leisurely walk is 17 inches. He is so elegant and his gaits are showing such potential. He should finish growing at 17.1-17.2H Ripley is really coming into his own.

Ripley qualified for Dressage at Devon Championship class at both shows he attended this year. Not only did he win a spot in the championship against other nice, well bred horses, but he qualified by score as well!

Ripley has strong, big knees and hocks with bone to match. This horse is built to last. So straight and correct!

Ripley walking up the driveway at Wildest Expectations Farm.
https://youtu.be/QtP0mw6GSP8

This is your chance to possess an extraordinary horse at a very reasonable cost. If you are looking for a high level sport horse Ripley is the one. With age and training he'll be a top of the line competitor.

Snappy Ripartee (Ripley) was born May 9th, 2019 and is offered for sale. He is a lovely Danish gelding with a large centered star and 3 white socks.

He is very correct in his conformation, straight legs and large joints. His movement is phenomenal, beyond compare! He has a ground covering walk with huge overtrack. Floating elastic trot with loads of air time. Beautiful balanced canter! His personality is so sweet and he is people focused. He looks to please.

As the Danish inspection team come to the US every other year he will be inspected and branded in 2021. If purchased prior to the 2021 inspection, the cost of inspection and branding will be included in his purchase price.

Ripley's sire, Ripline, is a bay with no white. Stands 16.2 hands

Ripline is a 2008 Danish Warmblood stallion by Blue Hors Hotline out of Riviera/Blue Hors Cavan.

Ripley's grandsire, Blue Hors Hotline, was the superior winner of his 70-day performance test and was Champion Stallion of the Hanoverian Licensing in 2005. He sired the 2010 Danish Warmblood Mare of the Year and his offspring have been successful in competitions internationally. Hotline is still competing internationally with rider Daniel Bachmann Andersen and most recently placed 7th at the World Cup Qualifier in Odense. The pair hope to represent Denmark at the 2016 Olympic Games in Rio de Janeiro.

Ripley's dam, Temptress is an exceptionally well-bred hunter/jumper mare. Her sire, Voltaire, is the leading Hunter sire in the US currently. Her dam, Halftone, is the full sibling to the Jumper and approved SF Stallion D'Accord. The bloodlines on both top and bottom are some of the best in the world. She is short coupled and extremely athletic. She has good solid bone and large joints. The potential for this mare is unlimited. She is not started under saddle as she has been busy producing exceptional foals. She is an approved mare with the Oldenburg ISR N/A. She was awarded DH Mare and invited to be neck branded by the Danish Registry. Each one of her foals has been better than the last!

Ripley's dam, Temptress's 2011 foal, TripTheLightFantastic (Tango), is by Cabaret and is a registered Oldenburg ISR N/A. He is a 17.2+ hand bay gelding. Tango was the high scoring colt and only Premium foal at his Oldenburg ISR N/A inspection with an 8.2 for his overall score! He has consistently scored well at the Dressage Breed Shows with frequent scores of 8.

Ripley's dam,Temptress's 2012 foal, Flying Solo (Gracie), is by Solos Landtinus and is a registered Danish Warmblood. She is a 16+ hand bay filly. Gracie was high scoring foal at her Danish Inspection with consistent scores of 8. She has scored well at the Dressage Breed Shows with frequent scores above 8 and several scores as high as 8.6!

Ripley's dam, Temptress's 2014 foal, High Caliber Soul (Cal), is by Solos Landtinus and is registered Danish Warmblood. He is a chestnut gelding. Cal was high scoring foal at his Danish Inspection with consistent scores of 8 and a 9 for Type and Frame. He has received several 8's at the Dressage Breed Shows with excellent comments from the judges.

Ripley's dam, Temptress was shown successfully in-hand at four dressage breed shows in 2007. She placed first at three of those four. She also was Filly Champion, Young Horse Reserve Champion and Reserve Grand Champion. She qualified for the East Coast Breeder's Championship Series at Dressage at Devon.

Ripley's dam, Temptress's Sire is Voltaire, the leading Hunter/Jumper sire in the U.S. and Europe. Her Dam, Halftone is by Olisco, the Barcelona Olympic qualified (That year Michael Matz qualified the #1 and #2 positioned horses for the Olympic team. Heisman was the one who competed and Olisco was the reserve competitor for the U.S. team.) Grand Prix Stallion and out of Servus an international Grand Prix competitor by Lucky Boy. Temptress is not under saddle.

Ripley's dam, Temptress is registered Selle Francais and approved Oldenburg NA. At her Selle Francais Foal Evaluation she scored 7.4, which earned her a rating of Tres Bon. She is in the Oldenburg Main Mare Book with a score of 102. She is also approved by the Danish Warmblood registry earning her DH and was neck branded by the Danish inspectors. Her 2011 foal, TripTheLightFantastic, is registered Oldenburg and he was the high scoring premium foal at the Chestnut Lawn Inspection in VA with a score of 8.2.

Breeding, showing in-hand and selling world class Selle Francais, Danish Warmbloods and Oldenburgs since 1993. Our horses are bred to win! Our young horses placed 3rd for Breeder's Group in the highly competitive class at Dressage at Devon 2021. The Wildest Expectations Farm broodmares are from world class Jumping and Dressage bloodlines. Our foundation mares are Elite Selle Francais and rated DH with NADWA. We are known for consistent quality.
Email Seller Now
Visit Seller Website
More Horses From Seller